This week I am joined by two cancer survivors who successfully beat their cancers but ended up as part of the group of patients who have problems where they received radiation therapy, called “late effects of radiation”. For most patients who experience these issues the symptoms they experience get better with a few weeks of time and conservative measures. But for some, they persist and can have significant impact on quality of life.  The symptoms these patients experience depend upon where the radiation was administered on to the body.  They can include non-healing wounds on the gums, sometimes exposing the jaw bone (mandible), necrosis (cell death) of the jaw bone, breast pain, chronic diarrhea, bleeding with urination or bowel movements, bladder pain, painful bowel movements, and sensations of urinary and/or bowel frequency and urgency.  Hear how they were able to successfully treat their late effects of radiation with hyperbaric oxygen therapy. 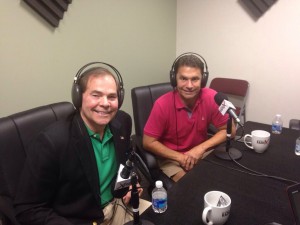 Dick Cailouet and Dan Dodson, cancer survivors who are among the group who experienced late effects of radiation.