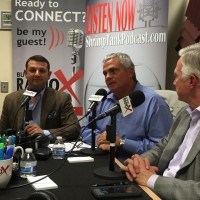 Feeding Young Entrepreneurial Minds & Businesses Plans Entrepreneurs come to the Shrimp Tank to compete for funding to grow their dreams.

Mr. Ordono is the Founding Partner and majority owner of First Fence of Georgia. He has fifteen years fence industry experience in a broad range of Operations, Sales and Executive positions. He has achieved CFP (Certified Fence Professional) status, certified by the American Fence Association and is recognized for professional achievement in the Industry.