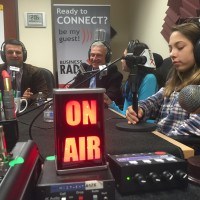 Feeding Young Entrepreneurial Minds & Businesses Plans Entrepreneurs come to the Shrimp Tank to compete for funding to grow their dreams.

Special Holiday Episode featuring the children of your Hosts of The Shrimp Tank Chris Hanks and Ted Jenkin.

Hanks leads the International Entrepreneurship Institute and is certified in business valuation, providing expert witness testimony. Before teaching at UGA, Hanks taught entrepreneurship at Georgia State University and assisted in leading the Russell Center for Entrepreneurship. He earned a BBA from University of Georgia and an MBA from San Jose State University. Before launching his first business, Hanks held corporate risk management positions in the pharmaceutical and beverage industrie