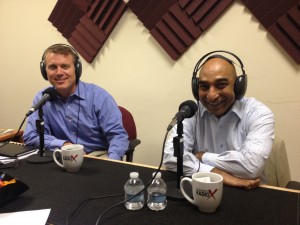 In this interview, Scott Ellyson and Govind Hariharan joined host Alvin C. Miles to explain what you need to know to maximize your global leadership acumen!

Scott was born and raised in Wisconsin.

After attending high school at the Culver Military Academy in Indiana, Scott went on to graduate from the University of Florida with a B.S. in Industrial & Systems Engineering.  After graduation, he spent time in quality control in the biomed space and supply chain management consulting with Price Waterhouse Coopers before co-founding ITS – a China based electronics manufacturer producing automotive components and electronic assemblies for North American suppliers.  ITS supplied circuit boards for Cadillacs and cruise controls for Camrys and Corollas.

After ITS, Scott became VP of Offshore Manufacturing and Logistics for Diversitech, building their offshore division to supply the HVAC industry.  In 2001 Scott and his partner offered to take the division as a separate business and East West Manufacturing, a global contract manufacturer, was born.

Dr. Hariharan spearheads the India Initiative for Coles College that has resulted in significant partnerships in business education and corporate training. He has previously held positions at SUNY-Buffalo (including Co-Director at Center for Public Policy and Regulation) and West Virginia University.

Dr. Govind Hariharan has consulted for numerous organizations, public and private, such as the World Bank, Council for Quality Growth and M&T Bank. He was a co founder of a technology start up in the retail food sector between 1999 and 2001. He is very active in the business and civic communities in Georgia. He has been a member of various state and local task forces on health care especially in the areas of health information and transparency. He has been a key speaker at various summits including Global Business Leaders Forum and Tie-Con East. He was a member of the Technical Advisory Committee for Atlanta Regional Commission (ARC) on Forecasting Atlanta 2040. Dr. Hariharan is a member of many advisory boards including the WellStar Institute for Better Health, the American Diabetes Association- Atlanta, Georgia Indo-American Chamber of Commerce and is a mentor for TiE-Atlanta. He is actively involved in many academic and business organizations in India as well. He has been interviewed or quoted in many media outlets including the Atlanta Journal Constitution, Atlanta Business Chronicle, Buffalo News, National Public Radio, Money Talks, Channel 5 and the Weather Channel.

Dr. Govind Hariharan’s research is extensively cited. His papers are key citations in a health care, personal finance, regulation, economic development, information technology, and law. He was coeditor of a conference volume on The Problem of Development which featured articles by most of the recent Nobel Laureates in Economics. One of his papers was chosen as among “key papers by leading scholars” and reprinted in “Classics in Risk Management” edited by Professors Gayer and Viscusi of Harvard University. Similarly his paper on Estate Taxation, and on smoking initiation are very heavily cited in the academic and policy literature. His recent research on the stockholding behavior of US individuals won the prestigious Ross award in 2006 and another is among the top 10 most cited papers ever in the Financial Services Review. His current research studies the effect of different health shocks on portfolio allocation by the elderly (AMHCR award recipient), medical technology and technology intermediaries. He has taught a wide range of courses at universities across the globe including stints in India, China and Singapore and has received numerous awards for his teaching.

Which Book Has Most Impacted Your Leadership?