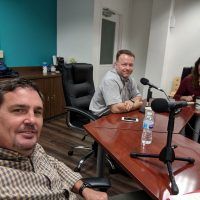 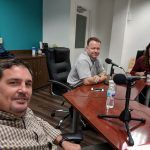 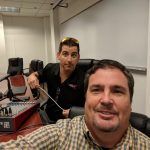 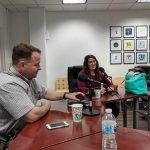 Jim has actively participated in the planning of the annual ITEN WIRED Summit since 2012 and is in his 6th year serving as its director.

He is a native of Pensacola and a graduate of Tate High School and the University of West Florida, where he received his degree in finance. He moved to Charlotte, NC in 1997 with a goal of furthering his career in banking, but later developed a passion for information technology. Upon graduating ECPI College of Technology, he officially entered into the world of IT in 2001. After working several years as a network engineer, he and his family relocated back to Pensacola in 2007.

Jim has been employed by AppRiver since 2008 and currently manages the mobile solutions team which provides mobile device support for a global customer base of almost 300,000 users. He also serves as an advisor to the board of directors for IT Gulf Coast and as a board member for Innovation Coast.

He is married and has two sons. He enjoys golfing, kayaking, and fishing.

I am a graduate of the University of Rochester in N.Y., then was designated a Naval Flight Officer and a bombardier/navigator in the A-6E Intruder in 1992.
My Operational assignments include Attack Squadron Five Two (Knight Riders), NAS Whidbey Island with deployments onboard the USS Kitty Hawk (CV-63).   Attack Squadron–One One Five (The Eagles) forward deployed in Atsugi, Japan. Where he deployed onboard the USS Independence (CV-62).
I then reported to Electronic Attack Squadron One Two Nine to receive training in the EA-6B Prowler.  I was then assigned as a Plank Owner to Electronic Attack Squadron One Two Eight (VAQ-128) providing electronic attack support to U.S. Air Force Expeditionary Operations. My last squadron assignment was as Operations Officer for Electronic Attack Squadron One Three Two (VAQ-132).  During this tenure, the Scorpions, flying off the USS George Washington (CVN-73), provided round the clock combat air support for Operation Enduring Freedom.
My shore assignments include instructor duties withVA-128 and VAQ-129. I was the EA-6B Systems Phase Head, a class room and flight instructor and El Centro Detachment OIC.  Most recently while at NETC, I flew as an Associate Instructor with VT-86 in Pensacola.  I earned an MS in Information Systems and Operations at Naval Post Graduate School.  I then served as Computer Network Operation Branch Chief on the Joint Staff in the J-3 Deputy Directorate for Global Operations and Information Operations.
I reported to NRD New Orleans as the Executive Officer in June 06.  In December 2007, I assumed command of Naval Recruiting District New Orleans.  My tenure at NRD New Orleans started in the months following Hurricane Katrina.  My leadership was said to be instrumental in the critical reestablishment of Navy Recruiting on the gulf coast and the ascension of NRD New Orleans from number 26 to the number 3 recruiting district in the country in just three years.
In 2009 I was selected by the Chief of Naval Operations to Command a Navy Provisional Detainee Battalion forward deployed to Taji, Iraq, the largest Navy command on the ground in Iraq.  I led this Battalion of 450 Sailors guarding 4,000 of the most violent terrorists in Iraq, as well as training all Iraqi Correctional Officers to transition detention operations to the Gov. of Iraq in April of 2010.
I returned from Iraq and reported to Commander Naval Education and Training Command (NETC) as the Deputy Director of NETC Information Management Division.  Along with the staff and field teams, we provided secure, reliable, state of the art information technologies and business capabilities on the world’s largest training network to enable NETC’s mission; training every sailor for the fleet.
After I retired from active duty in 2013, I decided to settle my family in Pensacola and started my own business; Sean O’Brien Consulting, LLC.  The firm provided IT Business Integration, Solution Architect, Business Capture and Development, Strategic Planning, Business Process Reengineering, Information Systems and IT Operations services.  In 2015 a contract evolved into a full time executive position with CSRA.  I am currently the Program Executive for the NETC ITSS Program.
My Military awards include the Defense Meritorious Service Medal, Meritorious Service Medal, Air Medal with “V” device, Arial Achievement Medal, Navy Commendation and Achievement Medals, Army Commendation and Achievement Medals.
I am married to the former Jennifer A. Schulz of New York and Mobile, Alabama.  We have five sons Connor, Dillon, Abner, Colin and Danann.

Kenzie Fitzpatrick is a two-time graduate of Florida State University and an accidental entrepreneur. She received her bachelor’s degree in Information, Communication and Technology in 2013 and then went on to pursue her master’s degree in Integrated Marketing and Management Communication. Shortly after graduating with her master’s degree, she opened a marketing firm. As of today, she has worked with flower shops, shooting ranges, holster brands, hospitals, not for profits, retail clothing stores, salons, and many more small businesses. Kenzie has worked as a Coordinator helping start the nation’s first stand-alone entrepreneurship school at a public university, volunteered as a Co-Organizer for 1 Million Cups both in Tallahassee and Pensacola, is an adjunct professor at Pensacola State College, and is the Marketing Coordinator at VetCV. When she’s not running around town on her laptop, Kenzie enjoys competitive shooting, reading books of all genres, and spending time outdoors.

Whether you are an executive, entrepreneur, IT professional, student, or just looking for insights into the current issues that concern information technology, the ITEN WIRED Summit is a valuable resource. There will be many networking opportunities with peers and area leaders. No matter your industry or location, you’ll be sure to find interesting and engaging people and topics at this year’s summit! Last year’s Summit sold out, so register early.

ITEN WIRED is the Gulf Coast’s premier conference for executives, entrepreneurs, professionals, and educators working in technology. With topics including cybersecurity, tech makers, start-up tech, virtual environments, simulation, and robotics, you’ll be sure to find something inspiring. Expert presenters offer an excellent forum for professional development. Don’t miss this opportunity to exchange ideas and forge new collaborations around innovation, technology, and entrepreneurship.

The day will begin at 8:00 AM on October 2, 2018 with Welcome Remarks from our ITEN WIRED Chairman Jim Rhodes and IT Gulf Coast’s Chairman Sean O’Brien.

With over 300 registrants and dozens of large corporations and small business expected to attend, this will be a great event for you to learn, network and make some great contacts.
Register for Industry Day Here

How It Works
We will be running the networking session for approx 20-30 businesses, each person will spend 2-3 minutes (depending on final numbers) with each participant.  We would ask participants to prepare a short pitch about themselves, company details and what you are looking to get out of the event.  You may wish to summarize your information on paper with your contact details and give a copy to each participant to refer to after the event, after all, they will have met a lot of new contacts in a short space of time, so make yourself memorable!

Benefits Of Business-To-Business Speed Networking
•    The main purpose of the speed networking is to meet lots of new contacts in a short space of time-saving valuable time and money
•    Within a few minutes, you can decide if you wish to spend more time with that company/person during the main forum networking events and if there is a possibility of a business relationship
•    Helps maximize your time at the forum making sure you meet the people that can offer you real business opportunities
•    If you take into account each participants business contacts, you are potentially connecting with hundreds of relevant industry people
•    Increases your networking profile within the industry
•    People like to do business with people they have met and like
•    A great icebreaker, the informal format takes the awkwardness out of traditional networking; it is a fun and easy way to meet a wide variety of people.
Some Frequently Asked Questions:
•    The dress is Business Casual.
•    Check-in is at 8:00 AM
•    Speed Networking requires a separate registration. Be sure to email —— if you are interested in participating.
•    Tables are not reserved. (Except Head Tables)  Tables are numbered to assist you in finding someone you haven’t met.
•    Presentations will be posted after the SBIOI.  SSC Atlantic presentations may take up to 2 weeks and will be posted on their site.  Industry presentations will be posted on ITEN WIRED’s website.
•    A “Take Away Table” will be set up in the lobby.  Feel free to leave your company flyer on this table. Anything left at end of the day will be thrown away.
•    Coffee and tea will be available throughout the day.
•    Lunch will not be provided, but there will provide a listing of places that are close by.
•    Interested in joining the IT Gulf Coast or becoming a corporate sponsor? Come see ——- at the check-in desk.

The Best of ITEN Wired