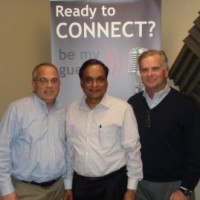 Nitin Shah serves as president of Imperial Investments Group Inc., a Georgia-based hospitality company he founded in 1984 which currently has assets approaching $100 million, including 15 hotels plus a variety of commercial real estate projects. He is also chairman and CEO of Embassy National Bank, an Atlanta-based community bank he helped establish in 2007 which has grown to $100 million in assets and is a leading lender to small businesses in the southeastern United States.

Bobby Goff has been a small business real estate lender for most of his career. Specifically, he is experienced in the use of the guaranty program from the U.S. Small Business Administration and has used it for the benefit of small business borrowers since the early 80s, first with savings and loan associations, then with non-bank lenders, and for the last 12 years with banks. During this time he has financed well over $200 million in transactions. He grew up in Savannah, has been married for 25 years, and has a son who is a student at Ole Miss. In his spare time Bobby enjoys being outside, especially on the water or the golf course.

On the Money focuses on topics and issues allowing small businesses to better navigate the financial services minefield, with analysis and opinions from today’s industry experts on banking and loans. On the Money also introduces you to some of the top small business leaders in the Atlanta market. Hosted by Joe Moss, the president of Embassy National Bank, On the Money airs live every Wednesday at 3:00 PM EST from the Business RadioX studio in Gwinnett.