The Chick-fil-A Kickoff Game is the nation’s longest-running kickoff game and has reshaped the opening weekend in college football.

Over 17 games since 2008, the game has regularly hosted the nation’s top teams and has drawn 1.1 million fans, 87.4 million television viewers, distributed $101.3 million in team payouts and created an additional $498.5 million in economic impact. 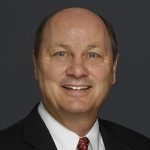 Gary P. Stokan is CEO and president of Peach Bowl, Inc., a position he has held since 1998.

Under his management, Peach Bowl, Inc. events have generated an economic impact of $1.299 billion and $79.34 million in direct government tax revenue for the city of Atlanta and state of Georgia since 1999.

Stokan has positioned the Peach Bowl as one of the best bowl game organizations in the nation, and earned the Chick-fil-A Peach Bowl a position as a New Year’s Six bowl game in the College Football Playoff (CFP) and will host future CFP Semifinal games in 2022 and 2025.

Stokan also inked contracts with Mercedes-Benz Stadium through 2025 and with Chick-fil-A to continue its title sponsorship of both the Bowl and Kickoff Games through 2025.