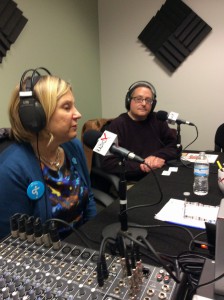 This week we sat down with the President and CEO of National Parkinson Foundation, Joyce Oberdorf and Larry Kahn, CEO/Founder of PD Gladiators, a man who develoed early-onset Parkinson disease.  Approximately 1 Million people are living with Parkinson disease in the US today.  The National Parkinson Foundation’s website describes Parkinson disease this way, “Parkinson’s disease (PD) is a chronic and progressive movement disorder, meaning that symptoms continue and worsen over time. Nearly one million people in the US are living with Parkinson’s disease. The cause is unknown, and although there is presently no cure, there are treatment options such as medication and surgery to manage its symptoms.

Parkinson’s involves the malfunction and death of vital nerve cells in the brain, called neurons. Parkinson’s primarily affects neurons in the an area of the brain called the substantia nigra. Some of these dying neurons produce dopamine, a chemical that sends messages to the part of the brain that controls movement and coordination. As PD progresses, the amount of dopamine produced in the brain decreases, leaving a person unable to control movement normally.”

Joyce came by to talk about research the National Parkinson Foundation is supporting that is aimed at improving the quality of life of patients living with the disease today.  They seek to share best practices that show promise among providers, with regard to the pace of progression and/or severity of symptoms so these persons can enjoy life more fully, longer.

She brought Larry Kahn, founder of PD Gladiators, a boxing gym exclusively for PD patients that was launched after Larry learned about and experienced the benefits of vigorous exercise on his symptoms.  He shared his poignant story about learning he has PD (after having had it missed over a year earlier by his initial doctor), how he and his wife approached the diagnosis, and how/why he started PD Gladiators.  Larry and Joyce talked about research that has shown the benefits of vigorous exercise on cognitive function among ALL of us, including PD patients.  They endeavor to share that information widely so that more PD patients can receive the reparative benefits themselves.

We talked about the resources needed by the National Parkinson Foundation and Larry that will enable them to further advance awareness and quality of life among Parkinson disease patients.  We hope you share this podcast, as the information they shared will very likely help someone you care about who’s suffering with Parkinson today.