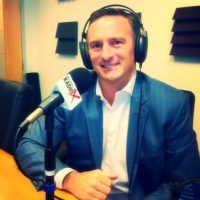 On this week’s episode I sat down with founder of Afterburner Inc., Jim “Murph” Murphy stopped by to talk about their innovative Flawless Execution strategy for leadership and sales growth.  Murph has a unique and powerful mix of leadership skills in both the military and business worlds. After initially spending a couple of years in sales after college, successfully helping his company significantly increase their sales, he happened to meet an Air Force pilot who made a big impression on him.

He joined the U.S. Air Force where he learned to fly the F-15, ultimately logging over 1,200 hours as an instructor pilot in the F-15 and accumulated over 3,200 hours of flight time in other high-performance aircraft. As the 116th Fighter Wing’s Chief of Training for the Georgia Air National Guard, Murph’s job was to keep 42 combat-trained fighter pilots ready to deploy worldwide within 72 hours. He also flew missions to Central America, Asia, Central Europe and the Middle East as a Flight Leader.

Before his service in the U.S. Air Force, Murph had a successful career in imaging equipment sales, where he helped increase his company’s sales by 500%. Years later, he became Director of Sales for a small paint company. The concepts he developed and utilized in business and the U.S. Air Force would become known as Flawless Execution. By applying Flawless Execution’s continuous cycle of planning, briefing, executing, and debriefing, he increased his new employer’s sales from $5 million to $52 million per year.

It was clear that any business or organization could benefit from these same concepts, so Murph launched Afterburner Incorporated in early 1996.

Today, the Afterburner team shares their story and their Flawless Execution approach to improving leadership, team cohesion, and sales to executives at over 200 events per year.