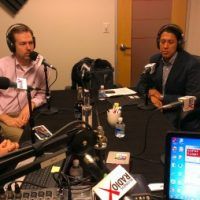 Vixen Vodka was conceived by LeeAnn Maxwell and Carrie King after a girls’ trip to St. Simons Island in Georgia. It was an idea that came to fruition after a few slightly dirty martinis and several sun-soaked hours lying by the pool. An idea that took root and took hold of friends who wanted to make a difference in their lives; it was their why not moment. After all, women like to hang out, chill out and drink vodka just like the boys. But research and focus groups showed that no vodka brand currently on the market tapped into targeting women. In fact, it was a boys’ club waiting for a revolution. So they decided to raise their glasses to toast an idea that eventually became Vixen Vodka. This award winning company is poised for national expansion and is the perfect marriage of a sexy flirty brand and the smoothest gluten-free vodka you’ll ever taste.  Schwegman and CW can attest to how great it tastes!

I had a chance introduction with Rick Tapia of La Bodega Interacional and founder of JR Revelry Bourbon during his appearance on our sister show “Let’s Talk Small Business“, sponsored by the Georgia Minority Supplier Developmental Council (GMSDC) just before we were going to be talking with LeeAnn of Vixen Vodka on Midtown Business.  On “Let’s Talk Small Business” he was celebrating Hispanic Heritage Month while talking about his involvement with the GMSDC and the launch of his new product.  Given the chance to sit down with two innovative entrepreneurs who were launching their own brand of spirits we were glad he was able to stick around and talk more about how JR Revelry came to be.  La Bodega Internacional is a wholly minority-owned producer of specialty craft premium spirits.  Rick spent 17 years in the alcohol beverage industry, gaining experience in the gamut of business roles from accounting to brand marketing and more.  He knew he wanted to have his own line of spirits and ultimately decided to plant his flag and leverage his working knowledge of the business to develop his own small batch bourbon.  He partnered with a well-respected distillery (SPEAKeasy Spirits) in Tennessee to produce JR Revelry, a combination of what he describes as “Some expected and some unexpected” flavor profiles in this excellent bourbon.  JR Revelry will begin to hit the shelves later in 2014 and expanding in early 2015.  Schwegman and CW are pleased to have been able to sample one of the bottles from his first 20 case batch!