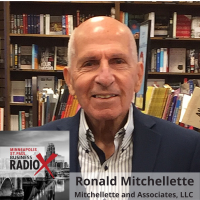 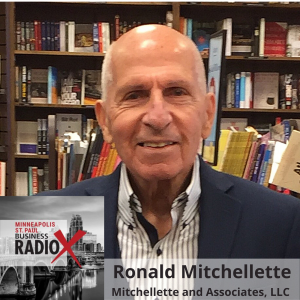 Seasoned entrepreneur Ronald Mitchellette joined host John Ray to share his entrepreneurial journey, what he’s learned from his successes and failures, and how he works with aspiring business owners. “Minneapolis-St. Paul Business Radio” is produced virtually by the Minneapolis St. Paul studio of Business RadioX®.

Clients do not have the time or money to waste on their own as they cannot afford a “Trial & Error” approach. On the contrary, use someone else’s “Trials & Errors” learning and avoiding the pitfalls of making the same mistakes. You will never regret it as what you will save in time and money, will be well worth hiring Mitchellette and Associates.

Mitchellette and Associates prides itself on over twenty-five years of battle-tested direct business consulting, plus another twenty years of performing the same function for other companies and then adding another 200 years of experience from the crew.

Ron Mitchellette is “the” quintessential entrepreneur having logged over forty years of his own early career small business launches, including his first venture, which he took public (IPO), and his second startup that became the Marine industry’s largest canvas cover supplier to OEM boat manufacturers.
​
He then sold his canvas company to an investment group and made a major mid-career change by joining the banking/finance industry, where he spent twenty years lending money to mid-sized companies for growth capital and M & A’s including revitalizing a fair amount of turn-around situations.

​He then resigned from his mid-career world of finance to start his third company, which became an Investment Firm dedicated to purchasing troubled financial institutions, including the purchase of a Bank and several Mutual Fund management contracts, before he sold his investment firm to a larger regional bank five years later, after he and his team rebuilt the bank’s capital position.

He then spent a year sailing the San Francisco Bay and re-started his teaching journey, where he left off when he was an Adjunct Professor at the University of St Thomas from 1975 to 1987 while building his companies referenced above, by teaching his SIGNATURE COURSE on Entrepreneurship at the Universities of San Francisco and Santa Clara.

He started his business consulting firm in 1995 in San Francisco and continued and grew it in Atlanta Georgia before relocating to San Diego and finally back to his adopted state, Minneapolis, MN.

“Minneapolis-St. Paul Business Radio” is hosted by John Ray and produced virtually from the Minneapolis St. Paul studio of Business RadioX® .  You can find the full archive of shows by following this link. The show is available on all the major podcast apps, including Apple Podcasts, Spotify, Google, Amazon, iHeart Radio, Stitcher, TuneIn, and others.