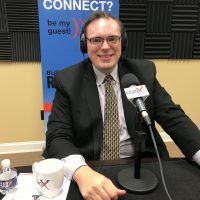 Why should you outsource your IT project management? What are the characteristics of a successful IT project manager? Joseph Garfield, Founder and CEO of Phase3 IT, answers these questions and much more on this edition of “Alpharetta Tech Talk,” broadcast from the North Fulton Business RadioX® studio inside Renasant Bank in Alpharetta.

Joseph Garfield is Founder and CEO of Phase3 IT, which has one mission: To help people succeed with complex IT projects. The company focuses on enabling business leaders to develop a clear vision of project success and then make their vision a reality through exceptional people and processes that cut through the fluff and deliver results. Phase3 IT’s background includes such recent projects as the merge of Northside/Gwinnett Hospitals, rollout of Cerner EMR to Northside, large network infrastructure upgrades, and various upgrades and deployments. Phase3 IT has a reputation for taking ownership of project delivery.

Joseph has a broad technical and business background that enables him to quickly adapt to diverse environments and get complex projects back on track.

“Alpharetta Tech Talk” is the radio show/podcast home of the burgeoning technology sector in Alpharetta and the surrounding GA 400, North Fulton, Roswell, Johns Creek, and South Forsyth area. We feature startup entrepreneurs, executives of larger enterprise companies, and other key technology players from a region with over 900 technology companies.  “Alpharetta Tech Talk” is hosted by John Ray and originates from the North Fulton Business RadioX® studio inside Renasant Bank in Alpharetta.