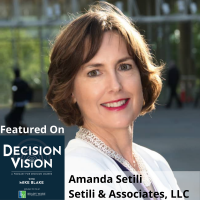 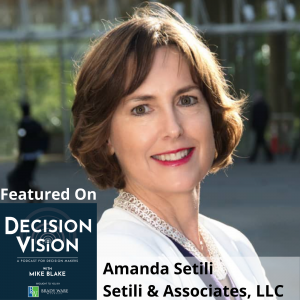 Do you think you understand risk? Whether you do or not, your understanding of risk and how it applies to your business is sure to deepen if you listen to Amanda Setili. Amanda joined host Mike Blake to consider what risk is, if and how we should take risks professionally and personally, the consequences of taking risks, and many other questions. In her words, “To be able to deal with uncertainty effectively and manage risks effectively is probably the number one thing that companies do to succeed in a fast-changing world.” Decision Vision is presented by Brady Ware & Company.

Amanda Setili is president of strategy consulting firm Setili & Associates. An internationally acclaimed expert on strategic agility®, she gives her clients—including Cardinal Health, Coca-Cola, Delta Air Lines, The Home Depot, UPS and Walmart—unbiased and laser-clear advice on how to respond quickly and intelligently to a changing marketplace.

Setili has advised organizations in industries as diverse as consumer and industrial products, financial services, technology, non-profit, and retail. Her work has taken her throughout North America, Europe and Asia.

Before starting Setili & Associates, she served as director of marketing for Global Food Exchange, consulted for McKinsey & Company (where she planted seeds that became the firm’s Kuala Lumpur office), served as chief operating officer of Malaysia’s leading Internet services company, and developed products and optimized manufacturing operations for Kimberly-Clark.

Setili is author of Fearless Growth: The New Rules to Stay Competitive, Foster Innovation, and Dominate Your Markets(Career Press, 2017) and The Agility Advantage, How to Identify and Act On Opportunities in a Fast-Changing World (Jossey-Bass, 2014). Setili served as an adjunct professor at Emory’s Goizueta Business School, is a member of the Marshall Goldsmith 100 coaches program and the Million Dollar Consulting Hall of Fame.