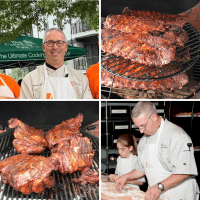 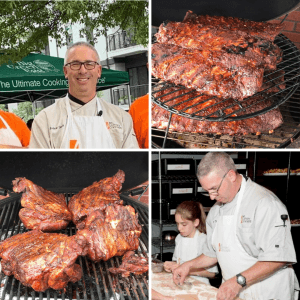 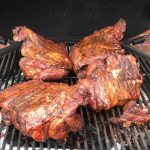 A&S Culinary Concepts is a culinary studio, offering cooking classes for private groups or open classes on line, team building for businesses and corporations, and provide corporate catering. They are a culinary partner with the Big Green Egg, so A&S offers many different type of Big Green Egg classes from grilling to all day boot camps. A&S are farm to table and deal with local vendors as much as possible. Most of their food is made on premises from scratch from mayonnaise to ice cream and pickles. They have a pastry chef on premise, so all of their pastries are made from scratch. Their menus are guidelines, they like to work with the customer to personalize what they want, this way you also know everything is made fresh for you. They invite anyone to come and see the studio at any time.

Due to the recent troubles the world over, they have had to adapt to continue to provide delicious food, now available for curbside delivery from Monday through Friday. This is a temporary business adaptation as they look forward to the day that they can once again serve our treasured corporate clients. So get it while you can!

Each oven-ready meal will feed 4-6 people with an entrée, salad, and your choice of two side dishes.  Rolls & delicious cornbread and fabulous desserts are available as add-ons.

Pricing is on each day’s menu. Simple heating instructions will be sent with your order confirmation.

When Andrew Traub was 15, his mother requested he go out and find a job. So he went down the block to the local Italian steakhouse and asked if they needed help. Luckily they did, and he was hooked into the world of food and beverage. That experience cemented his desire to become a chef and led him to choose a culinary school in the Catskill Mountains of New York for his college education. Andrew gained invaluable experience working in the enormous kitchens in the Catskill resort hotels while earning his degree. Recruited right out of school by Marriott Hotels and Resorts, Andrew was asked to be a member of the opening management team of the New York Marriott Marquis in Times Square. After moving his way up the culinary ladder and winning several culinary awards along the way, from culinary shows to corporate events, he left Marriott.

Andrew partnered with his college friend and opened Love at First Bite Catering in Manhattan. Clients included Radio City Music Hall, the Luxembourg Consulate, the Pace Collection and Fordham University. After selling Love at First Bite, Andrew and his wife, Sue, followed a dream and traveled around the United States for six months, sampling the cuisines of the various regions of our great country along the way.

After three years, Andrew was offered the opportunity to become Executive Chef of the Memphis Marriott Downtown Hotel and Convention Center. After a couple of years, Atlanta once again beckoned, and his next promotion was the position of Executive Chef of the Atlanta Evergreen Marriott Conference Resort in Stone Mountain, Georgia.

Andrew was at Evergreen for 14 years. During that period, he served on several Advisory Boards, notably Avendra (the purchasing company for Marriott, Hyatt and several other hotel companies); Lakeview High School in DeKalb County; and Grayson Technical Culinary Arts Program. The board position he is most honored to hold for thirteen years is on the Advisory Board of the Atlanta Community Food Bank and he is proud to continue to serve.

With his extensive professional contacts–many who have become friends–and his knowledge of the local culinary scene, he is ready to share his experience with you through his food studio, A&S Culinary Concepts.