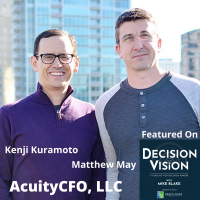 Decision Vision Episode 101: Should I Enter Into A Business Partnership? – An Interview with Kenji Kuramoto and Matthew May of AcuityJohn Ray
Download Audio 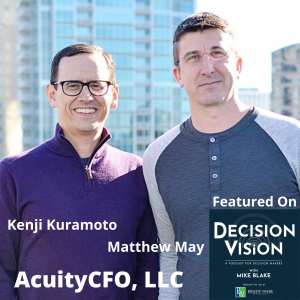 Decision Vision Episode 101: Should I Enter Into A Business Partnership? – An Interview with Kenji Kuramoto and Matthew May of Acuity

How do you put together a successful business partnership when the company has already been around for quite a few years? Kenji Kuramoto and Matthew May, co-owners of Acuity, join host Mike Blake to discuss why their partnership came together, why it’s worked for them and their company, stress points they’ve had to navigate, and much more. “Decision Vision” is presented by Brady Ware & Company.

Acuity was started in 2004. Founder Kenji Kuramoto built a CFO practice knowing he could help businesses by giving them the financial tools and advice they needed to reach their full potential. Along the way, he discovered that their clients had additional financial needs, including simple bookkeeping services. Acuity realized they could better serve small businesses and challenged themselves to expand their offerings.

In 2013, Matthew May joined Kenji, and Acuity was relaunched as a full-service financial firm, tackling everything from invoicing and bill pay to industry-leading financial strategy. As accounting experts, Acuity excels at pairing sound financial advice with modern technology, and they only consider themselves successful when they deliver practical accounting solutions that allow their clients to keep growing.

From balancing the books to assisting in a first acquisition, Acuity built its foundation on meeting clients where they are and helping them take the next step — wherever that may lead.

Connect with both Kenji and Matthew on Twitter:  Kenji Kuramoto | Matthew May