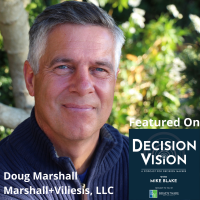 Decision Vision Episode 169: Should I Have My Business Valued Every Year? – An Interview with Doug Marshall, Marshall+Viliesis, LLCJohn Ray
Download Audio 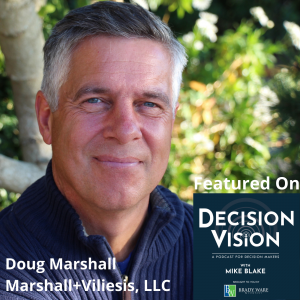 Decision Vision Episode 169: Should I Have My Business Valued Every Year? – An Interview with Doug Marshall, Marshall+Viliesis, LLC

Doug Marshall, Partner at Marshall+Viliesis, LLC, joined host Mike Blake to cover the process of having a business valuation done, and whether doing a valuation every year is advisable. They discussed the factors which impact a business’s value, ways it can be valued, reasons to do it annually, whether it should be done in-house or independently, and much more.

Marshall+Viliesis, LLC is a firm dedicated to helping owners Value & Protect their largest and most important asset. 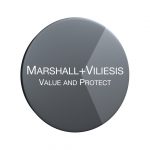 Business Value Protection Planning™ is a proprietary system developed by Marshall+Viliesis to help owners through the planning process with speed and accuracy. It guides them through the four critical areas of Succession, Retirement, Estate and Key Stakeholder. Planning.

Starting with a valuation Business Value Protection Planning™ has the ultimate goal of planning which is Current, Complete and Coordinated. Business owners think differently than the wealthy affluent and deserve a better planning experience designed for them.

Doug Marshall is a founding partner at Marshall+Viliesis, LLC. He is focused on helping owners get the planning they deserve to protect the wealth, income, and legacy of their business.

Previously Doug has worked with Nationwide, Manulife/John Hancock in the Corporate Products division where he developed and marketed Corporate-Owned and Bank-Owned Life Products. He has been associated with Penn Mutual on the brokerage side as well.

He is located in Seattle Washington where the state is home to over 400 Craft Breweries. Much of his focus is working with Brewery Owners, a fascinating manufacturing industry. If you are ever in Seattle he will be more than happy to take you on a tour!