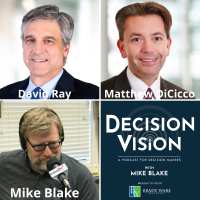 Decision Vision Episode 114: Should I Let My Children Take Over the Business? – An Interview with David Ray and Matthew DiCicco of Eubel, Brady & SuttmanJohn Ray
Download Audio 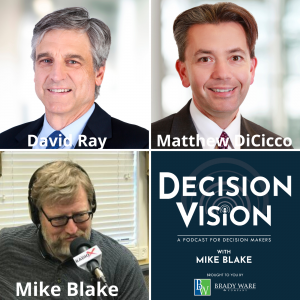 Decision Vision Episode 114:  Should I Let My Children Take Over the Business? – An Interview with David Ray and Matthew DiCicco of Eubel, Brady & Suttman

Only one in nine businesses make it to the third generation of family ownership. David Ray and Matthew DiCicco of Eubel, Brady & Suttman joined Mike Blake to cover some of the financial and psychological issues of transferring a business to the next generation, and the factors which go into that decision. “Decision Vision” is presented by Brady Ware & Company.

Eubel Brady & Suttman was formed when three friends came together as business partners more than two and a half decades ago. From the very beginning, a high value has been placed on trust, friendships, caring for clients, long-term investment results and a single value-oriented investment philosophy focused on absolute rather than relative returns. EBS clients are business partners and often become friends. They strive to communicate accordingly – being as transparent as possible. For EBS, Investing in You is about taking the time to learn what is important to every client, those they care about and how the firm’s investment and wealth management processes might provide them peace of mind.

David is responsible for the day-to-day business operations for the firm. He is also a member of the Consulting Services Group where he works with individual clients and business owners. David has 38 years of corporate management experience. Prior to joining EBS in 2003, he worked in various financial and management capacities at The Berry Company and as Chief Financial Officer of AcuSport Corporation. David holds a B.S. degree in Accounting from Wright State University in Dayton, Ohio and an M.B.A. from the University of Dayton in Dayton, Ohio.

Matt is responsible for developing long-term relationships with high net worth individuals and business owners, and serving as the firm’s general counsel. He takes a collaborative approach and applies the experience gained through his prior law practice to help clients address their unique circumstances. Prior to joining EBS in 2016, Matt practiced law in the private sector for more than 15 years. He holds a B.A. degree in Psychology from Gannon University in Erie, Pennsylvania and a J.D. from the University of Dayton in Dayton, Ohio.