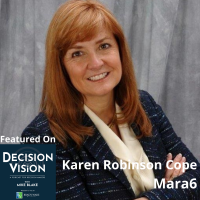 Decision Vision Episode 137:  Should I Form a Company Advisory Board? – An Interview with Karen Robinson Cope, Mara6John Ray
Download Audio 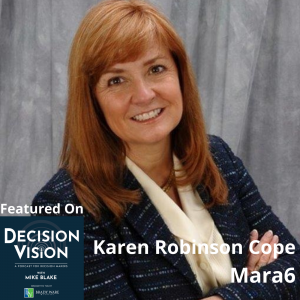 Decision Vision Episode 137:  Should I Form a Company Advisory Board? – An Interview with Karen Robinson Cope, Mara6

Karen Robinson Cope is a visionary and inspirational leader who takes ideas and disparate teams and builds great companies. As evidenced by her successes as a CEO of multiple early-stage, fast-growth companies, and numerous boards, she can identify a new market opportunity and then develop a clear strategy to quickly become a market leader. She is a decisive leader who is not afraid to take risks, appropriately utilizing strategic financing partners and developing sound financial metrics to keep new initiatives on track. She has been recognized numerous times over the last twenty years by multiple
organizations for her excellent leadership skills.

In a variety of industries and companies, Karen has joined an existing leadership team where she has developed the vision, rallied the existing team as well as recruited star performers, and executed a bold strategy that resulted in market leadership as well as strong financial performance.

She is exceptionally able to motivate marquis clients to embrace new companies or new business models because of her authenticity, servant leadership, and superior communications skills. In three prior companies where she was CEO or a board member, she was able to successfully build great companies generating tens of millions in revenue, drive new markets and industries and provide shareholder, employee, and customer value.

Karen holds a BS in Political Science and Economics from the University of Redlands. She serves on several Boards of Directors where she is helping to identify new opportunities, drive innovation, and expand businesses globally. In her spare time, she and her husband Rick, also a CEO, like to travel to out-of-the-way places, experience wild adventures, and mentor young entrepreneurs.