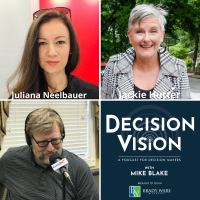 Decision Vision Episode 140: How Do I Select an Attorney? – An Interview with Juliana Neelbauer, Drew Eckl & Farnham, and Jackie Hutter, The Hutter GroupJohn Ray
Download Audio 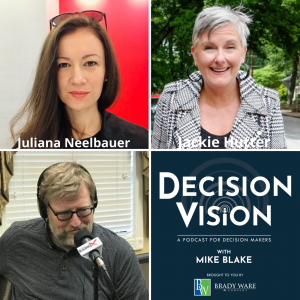 Decision Vision Episode 140:  How do I Select an Attorney? – An Interview with Juliana Neelbauer, Drew Eckl & Farnham, and Jackie Hutter, The Hutter Group

Two seasoned business attorneys joined host Mike Blake to discuss factors one should consider when choosing an attorney. Juliana Neelbauer and Jackie Hutter addressed how to find the right fit, setting expectations for the engagement, why the heavily promoted website ratings you see are misleading, why an Ivy League law degree doesn’t guarantee you’ll receive the counsel you’re looking for, and much more. Decision Vision is presented by Brady Ware & Company.

Juliana Neelbauer is a senior attorney who is the outside general counsel for companies that are product- or SaaS-centered, or IP-driven and that work with data and sensitive information in highly regulated industries. Her practice leverages her insights in cybersecurity, data management and analytics, government contracting, fintech, consumer-web, enterprise-software, health care delivery, medical products, supply chain, film, and political action sectors. She handles the full lifecycle of her clients’ needs including venture capital or private equity rounds, subsidiary formation, contract or governmental compliance, licensing, international transactions, and mergers and acquisitions. She is known as an attorney who brings an operator’s mindset, a technologist’s know-how, and an executive’s strategy to her client’s legal concerns.

Prior to joining Drew Eckl & Farnham’s Atlanta office, Juliana was the chief operating officer of Ad Hoc LLC. Ad Hoc is a Maryland-based mid-market federal contracting company that builds custom web portals that deliver government services to millions of Americans. Juliana oversaw the scaling of Ad Hoc from a 2-person small business to a 90-employee mid-market prime contractor with a 10x increase in revenues within a 14-month period.

Juliana started her career in software and business operations, founded two high-growth companies, and has overseen the scaling of many startups and mid-market companies in the tech industry before building a technology-focused law firm in the DC-metro area. She was born in Decatur and after more than 18 years away from the State, she was happy to return with her husband and daughter in 2017 to build the Drew Eckl & Farnham technology law practice in Georgia.

Drew Eckl & Farnham is a full-service law firm that offers deep litigation experience, strategic corporate and transactional counsel, and practical legal advice to companies, individuals and families. Their approach to practicing law is to resolve each new legal matter as expeditiously and efficiently as possible. They strive to propose a legal strategy that directly correlates with the risks involved.

Powered by their diversity, innovation, and commitment to the communities in which they work, Drew Eckl & Farnham has grown to more than 100 attorneys in Atlanta, Albany and Brunswick, Georgia and serves local and national clients throughout the Southeast.

Jackie Hutter has been recognized for each of the last 8 years for her innovative insights in creating value from IP Strategy with the peer-awarded Top Global IP Strategist by Intellectual Asset Magazine. Ms. Hutter’s IP Strategy clients have been varied, and include a Fortune 500 consumer hardware company, a large alternative energy company, several funded medical device ventures and dozens of startup companies with diverse technology offerings.

From 2011-2015, Ms. Hutter also served as the CEO of a startup battery-related company, which has provided her with a unique vantage point among her experienced colleagues about what it means to work with counsel to generate the critical IP necessary to prevent competitors from “knocking off” the innovator’s technology. Her experience extends beyond the IP realm: she frequently handles contracts and related matters for her clients, especially those relevant to clients’ IP rights.

The Hutter Group, LLC is an IP and legal strategy consultancy. As Principal, Ms. Hutter advises C-Level executives on how to create and enhance return on innovation investment.

They apply decades of experience in IP and business to identify the right IP strategy for your company. They don’t just dive into the technical aspects of your innovative product or technology to generate a patent application for you. Instead, they start with understanding your customers and how your competitors will react to your success. Their goal is to make it cheaper for someone who desires access to your innovation and customers to go through you than around you.

As IP Strategy consultants, they make their living helping you attain your business goals by providing IP solutions that allow you to achieve your desired revenue or exit. Only then do they start down the patent path.