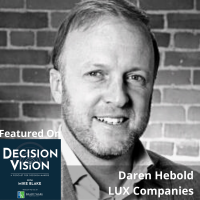 Decision Vision Episode 170: Should I Integrate Cryptocurrency into My Business? – An Interview with Daren Hebold, LUX CompaniesJohn Ray
Download Audio 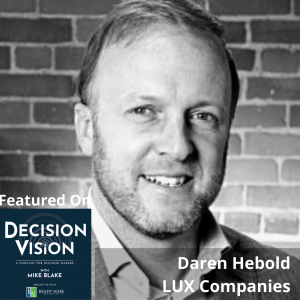 Decision Vision Episode 170: Should I Integrate Cryptocurrency into My Business? – An Interview with Daren Hebold, LUX Companies

Daren Hebold, CEO of LUX Companies, was Mike Blake’s guest on this episode of Decision Vision. He explained the basics of cryptocurrency and how it works, its history, apps for businesses to use cryptocurrency, use cases for crypto, the risks, and much more.

LUXOLO is your best-in-class concierge cryptocurrency service, located on the beautiful coastline of Portland, Maine. Their team believes in “own your keys, own your coins”. At LUXOLO they advocate self-custody of your digital assets. They will guide you through the process of securely storing your private keys, granting you direct and sovereign control over your wealth.

He has cultivated a broad reputation of trust within the industry and community given his command of confidentiality, fiduciary duty and financial skills in the handling of high value commercial real estate and digital assets. After getting financially thrashed by the Great Recession in 2008-09 and closely studying the US central bank and government responses, he began seriously questioning the composition, integrity and sustainability of our financial system which at its core includes a central bank that is privately owned, centralized and granted the outrageous right to unlimited emission of new currency at their sole discretion.

Needless to say, after critical analysis, research and discussions with friends, he stumbled upon bitcoin, blockchain and cryptocurrency. Seeing and participating in the extraordinary, freedom enabling benefits of this new parallel financial system together with its technological superiority, he founded LUXOLO Financial to broadly deliver cryptocurrencies and blockchain technology benefits to individuals and small businesses alike for everyday use in commerce.