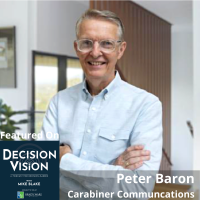 Decision Vision Episode 172: Should I Align My Company with a Political Position? – An Interview with Peter Baron, Carabiner CommunicationsJohn Ray
Download Audio 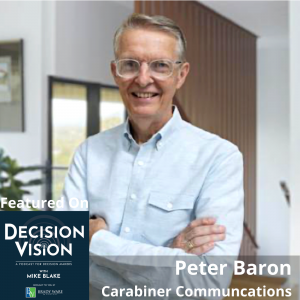 Decision Vision Episode 172: Should I Align My Company with a Political Position? – An Interview with Peter Baron, Carabiner Communications

If a company chooses to align with a political position, how does it impact revenue? Do consumers care more about their products than their politics? Peter Baron, CEO of Carabiner Communications, and host Mike Blake come to some interesting thoughts on this topic while considering examples of companies that have taken strong political positions such as Nike, Disney, and others. They discuss the kinds of influence companies engage in, what might factor into a board’s decision to take a position, the role of diversity on a board, the impact of “easy outrage,” and much more.

Carabiner Communications is a leading full-spectrum marketing and public relations firm. Founded in 2004, Carabiner Communications has a proven history of helping companies tell their most engaging stories and navigate a path to success. As their name implies, the agency helps B2B tech and healthcare organizations get connected to their targeted audiences and the influencers who have their ear.

The Carabiner team is comprised of experienced professionals whose services include messaging and branding, content development and marketing, public relations, lead generation, and more. They are known for being strategic, cost-effective, and always ready to partner with great companies to drive sales.

Although Peter began his career with a large PR agency in NYC, he ultimately found his way to the warm and sunny South and made it home. True to our agency name, he is one connected guy—some folks think he knows pretty much everyone in the Atlanta tech community. Peter is typically the Carabiner you’ll run into at conferences and networking events, where he’s friendly, open, and loves to talk about the latest technology trends or his large family.

While Peter drives agency direction and business development for Carabiner, he also consults frequently on accounts and offers high-level campaign strategy. He loves to brainstorm! Peter enjoys the great outdoors, including hiking, kayaking, and camping.

Fun fact: You may not realize it since he dropped the accent years ago, but Peter is from “across the pond”— he’s an expatriate of the U.K.