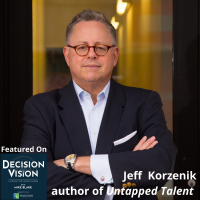 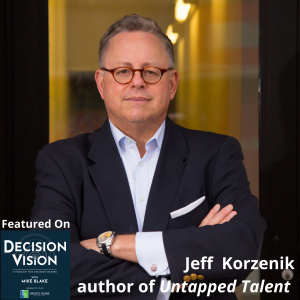 Decision Vision Episode 116:  Should I Hire Ex-Offenders? – An Interview with Jeff Korzenik, author of Untapped Talent

As an economist examining factors contributing to labor shortages, Jeff Korzenik singled out a particularly large demographic:  the 19 million unemployed people with criminal records. He joined host Mike Blake to discuss how “second chance” hiring among this untapped talent pool can give businesses competitive advantages, factors for business owners to consider with second chance hiring, and much more. Decision Vision is presented by Brady Ware & Company.

Jeff Korzenik is Chief Investment Strategist for one of the nation’s largest banks where he is responsible for the investment strategy and allocation of over $40 billion in assets. A regular guest on CNBC, Fox Business News, and Bloomberg T.V., his insights into the economy, markets, manufacturing, and the workforce are frequently cited in the financial and business press. His writings on economics and public policy have been published in Barron’s, Forbes, CNN, the Chicago Tribune, and other outlets. In recognition of his work on the interaction of the criminal justice system and labor markets, Jeff was elected to membership in the Council of Criminal Justice. 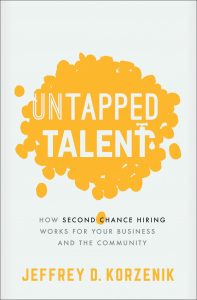 Jeff is the author of Untapped Talent: How Second Chance Hiring Works for Your Business and the Community (HarperCollins Leadership, April 2021), which shares the business case and best practices for hiring people with criminal records.

The book – the first and only work of its kind – shows that such “second chance” hiring, done right, delivers a loyal and engaged workforce.  Korzenik shows why companies will be challenged by multi-decade labor shortages but can gain a significant competitive advantage by developing talent pipelines from marginalized workers. While this is business, not charity, Untapped Talent argues that the path to a safer, more just America must be paved by the business community.