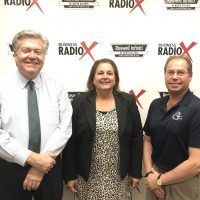 Tax strategies and advice for small businesses and money-saving alternative individual and group health insurance coverage were the topics on this edition of “North Fulton Business Radio” as Donna Beatty, Frazier & Deeter, and Bill Neglia, Neglia Insurance Group joined the show. “North Fulton Business Radio” is hosted by John Ray and is broadcast from inside Renasant Bank in Alpharetta.

Donna Beatty is a Tax Partner with Frazier & Deeter, a full service CPA tax, advisory and consulting firm. Frazier & Deeter has offices throughout the nation and in London, including locations in midtown Atlanta and Alpharetta, GA.

Donna lives in Roswell and graduated from the University of Georgia Terry School of Business. She has worked in public accounting for most of her career. Donna delights in helping clients to coordinate tax issues and related planning. Her expertise includes business income reported on individual returns, and how to manage the nuances of this tax paying structure.

Bill Neglia owns Neglia Insurance Group and specializes in working with self employed individuals, families business owners and their employees. The firm’s primary focus is to provide advice and outside-the-box solutions regarding healthcare and other benefits insurance plans such as life, disability, long term care, dental, vision and Medicare supplements. Bill’s firm has access to all of the major insurance carriers as well as many smaller niche companies that offer plans and strategies that are not offered by the traditional insurance providers.

Because Neglia Insurance Group is individually owned and locally operated, you get the personal attention you deserve. You don’t have to talk to a machine or push buttons to get answers about your insurance questions.

North Fulton Business Radio” is broadcast from the North Fulton studio of Business RadioX®, located inside Renasant Bank in Alpharetta. Renasant Bank has humble roots, starting in 1904 as a $100,000 bank in a Lee County, Mississippi, bakery. Since then, Renasant has grown to become one of the Southeast’s strongest financial institutions with approximately $12.9 billion in assets and more than 190 banking, lending, wealth management and financial services offices in Mississippi, Alabama, Tennessee, Georgia and Florida. All of Renasant’s success stems from each of their banker’s commitment to investing in their communities as a way of better understanding the people they serve. At Renasant Bank, they understand you because they work and live alongside you every day.