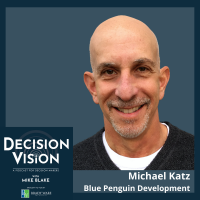 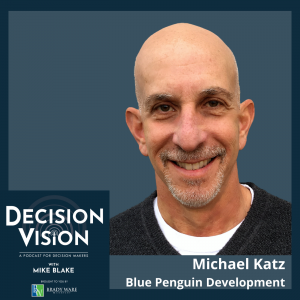 Do you need an email newsletter? How long should it be? What should you write about? Although written off quite a few times, email is still not dead. Mike Blake’s guest Michael Katz, email newsletter authority with Blue Penguin Development, discusses the strategy of email newsletters, how to make them effective, how to make the most of the content, and much more. Decision Vision is presented by Brady Ware & Company.

Blue Penguin Development Inc is a marketing and advertising company based out of Hopkinton, Massachusetts.

An award-winning humorist and former corporate marketer, Blue Penguin founder and Chief Penguin, Michael Katz, specializes in helping professional service firms and solos talk and write about their work in a way that is clear and compelling.

Since launching Blue Penguin in 2000, Michael has been quoted in The Wall Street Journal, The New York Times, Business Week Online, Bloomberg TV, Forbes.com, Inc.com, USA Today, and other national and local media.

He is the author of four books and over the past 20 years has published more than 500 issues of “The Likeable Expert Gazette,” a twice-monthly email newsletter and podcast with 6,000 passionate subscribers in over 40 countries around the world.

Michael has an MBA from Boston University and a BA in Psychology from McGill University in Montreal. He is a past winner of the New England Press Association award for “Best Humor Columnist.”