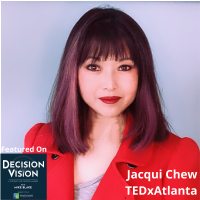 Decision Vision Episode 113: Should I Disclose My Mental Illness? – An Interview with Jacqui Chew, iFusion and TEDxAtlantaJohn Ray
Download Audio 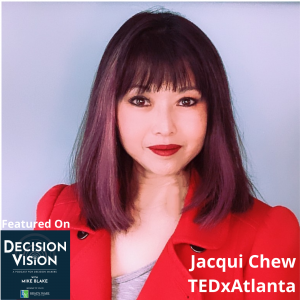 Decision Vision Episode 113:  Should I Disclose My Mental Illness? – An Interview with Jacqui Chew, iFusion and TEDxAtlanta

Diagnosed with bipolar disorder in 2005, Jacqui Chew seeks to normalize the conversation around mental illness. In a candid and open conversation with host Mike Blake, Jacqui discussed the journey to her diagnosis and how she’s learned to manage it. She also offered advice to HR directors and the rest of us who are approached by an employee or friend who discloses their mental illness. “Decision Vision” is presented by Brady Ware & Company.

A creative problem solver and convener, Jacqui believes in the potential for ideas to change the world. As licensee of TEDxAtlanta, one of the largest TED affiliates in the region, she galvanizes a team of volunteers to produce the annual TEDxAtlanta show. Under her leadership, tickets for nine of the 11 sold out weeks before. This must-attend event has become the platform for tomorrow’s leaders playing host to renowned bioethicist Paul Root Wolpe, hunger eradication entrepreneur Jasmine Crowe, and Ryan Gravel, the “father” of the Atlanta Beltline.

Jacqui served as senior vice president of marketing at Avertium, an award-winning cybersecurity firm founded from a three-company roll-up. She led brand marketing, demand generation, social media, PR, sales enablement, analytics, marketing operations, and communications. During her tenure, Jacqui spearheaded the company’s successful repositioning, messaging and rebranding and, its CRM/marketing automation platform integration. She also worked cross-functionally to support the acquisition of a fourth company during this period.

Previously, as CMO-in-residence at the Advanced Technology Development Center at Georgia Tech (ATDC), a globally ranked business incubator, she worked with the 170+ companies to develop their go-to-market and product strategy. During her tenure, she also developed and taught the incubator’s first strategic marketing curriculum.