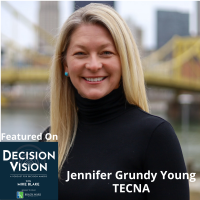 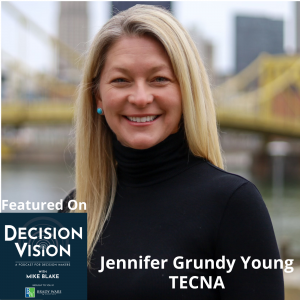 Decision Vision Episode 133:  Should I Engage in Lobbying? – An Interview with Jennifer Grundy Young, Technology Councils of North America (TECNA)

What is lobbying and should businesses be involved in it? Jennifer Grundy Young, CEO of TECNA, helped break down lobbying with host Mike Blake, why and when it’s necessary, what makes for effective lobbying, common misconceptions, and how businesses can use it for their benefit. Decision Vision is presented by Brady Ware & Company.

TECNA represents approximately 60 IT and Technology trade organizations that, in turn, represent more than 22,000 technology-related companies in North America.

TECHNA empowers regional technology organizations and serve as their collective voice in growing the North American technology economy. They strive to deliver valuable services to member organizations fostering collaboration, innovation, and the exchange of ideas.

Jennifer Grundy Young is a seasoned association executive with an extensive background in representing organizations that serve the advanced manufacturing, technology and life sciences industries.

In her current capacity, Ms. Young serves as the Chief Executive Officer of the Technology Councils of North America (TECNA). TECNA represents 66 technology trade organizations from across the United States and Canada that collectively represent more than 22,000 technology related businesses. In this role, Ms. Young is tasked with advocating on behalf of the technology industry as well as creating a platform for the members of TECNA to share best practices.
Prior to joining TECNA, Ms. Young served as the Director of Policy and Public Affairs for Life Sciences PA, which is a statewide association that advocates on behalf of Pennsylvania’s diverse medical device, pharmaceutical, and life sciences-related industries. While there, Ms. Young worked closely with the Pennsylvania General Assembly to create policies to make the Commonwealth of Pennsylvania the best place for a life sciences business to start, grow and thrive.
Ms. Young served nearly 12 years as the Director of Government Relations and Industry Networks for the Pittsburgh Technology Council. During her time with the Council, Ms. Young worked extensively with the region’s advanced manufacturing, life sciences and information technology sectors to develop pro-growth public policies to advance those fast-growing segments of Pittsburgh’s economy.
Ms. Young gained her initial public policy experience serving as an aid to U.S. Congresswoman Melissa Hart, who represented Pennsylvania’s 4th Congressional District and served on the powerful Ways and Means Committee.
In her free time, Ms. Young is an avid runner and is an active volunteer and mentor in her community. She graduated from Westminster College and lives in Upper St. Clair, Pennsylvania, with her husband and two boys.
LinkedIn