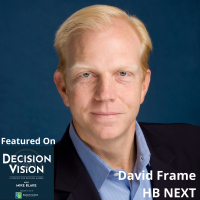 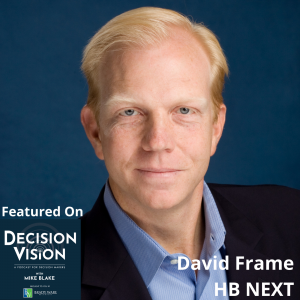 Decision Vision Episode 104:  Should I Layoff Employees? – An Interview with David Frame, HB NEXT

Reflecting on an earlier career experience at Allconnect, David Frame, now CFO of HB NEXT, joined host Mike Blake to discuss decisions on layoffs he and his management colleagues had to confront during the 2007-2008 recession. “Decision Vision” is presented by Brady Ware & Company.

David Frame is Chief Financial Officer of HB NEXT. David’s focus has been on growing and scaling private equity-backed technology-enabled services companies in the $25 to 50 million range, and has held both financial and operational leadership roles. David’s passion is developing people and building high functioning teams to effectively execute growth strategies. Outside of work, he volunteers in the Boy Scouts of America, stays active with golf, basketball, and skiing when he can.

He has an MBA in Finance and Electronic Commerce from Vanderbilt.

HB NEXT is a technology-enabled services company servicing construction, industrial, and energy companies with a range of safety and environmental compliance and training solutions.  In business since 1999, the company constantly evolved with technology and now provides several SaaS platforms for clients including SafetyCloud and StormCloud for safety and environmental compliance.

HB NEXT is also proud to be a part of the Construction Ready program, providing training for individuals looking for careers in the commercial construction industry.  To date, the program has successfully placed over 1000 students in high-paying construction jobs in Georgia.