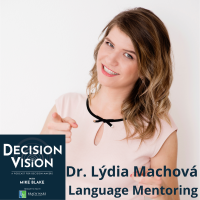 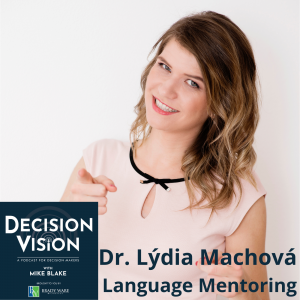 Decision Vision Episode 143:  Should I Learn Another Language? – An Interview with Lýdia Machová, Language Mentoring

Lýdia Machová of Language Mentoring says that you don’t have to be a genius to learn multiple languages. You only need to be motivated and use the right tools. On this edition of Decision Vision, Lýdia and host Mike Blake discussed the ease of learning a language in the internet age, methods that work and don’t work, what it really takes to succeed at learning a language, and much more. Decision Vision is presented by Brady Ware & Company.

Language Mentoring is Lýdia’s way of guiding anyone on their language learning journey – whether starting from scratch as a beginner or trying to achieve fluency in a language that’s got rusty. The main pillars of Lýdia’s philosophy are having fun (enjoying the process), having intensive contact with the language, using effective methods, and building a sustainable system in one’s learning. The methods range from watching TV shows and listening to podcasts through learning vocabulary using the Goldlist method to learn vocabulary, to talking to oneself in order to practice speaking. Lýdia has already helped more than 10 thousand people learn more than 30 languages.

Lýdia is a polyglot from Slovakia who has learned 9 languages on her own, without ever living abroad. In 2016, she turned her language passion into a business and founded Language Mentoring – her own way of helping people learn any language by themselves, using natural and fun methods known by polyglots. Formerly, Lýdia worked as a professional conference interpreter and interpreted several high Slovak politicians as well as international speakers such as Tony Robbins and Brian Tracy. She also organised the world’s largest event for polyglots and language lovers called Polyglot Gathering. Her TED talk has received more than 12 million views within the first 2.5 years of being online.