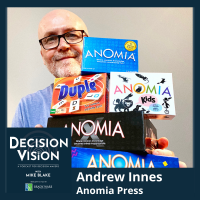 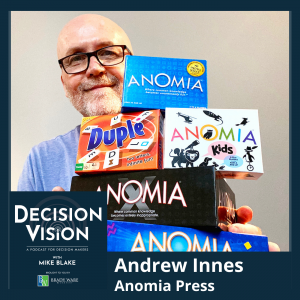 Decision Vision Episode 147:  Should I License My Intellectual Property? – An Interview with Andrew Innes, Anomia Press

Is licensing intellectual property “easy money” or is there more to it than that? How do you go about getting IP licensed? Andrew Innes, designer of the game ANOMIA and CEO of Anomia Press, joined host Mike Blake to discuss his journey to licensing his games, how and why one might decide to license, marketing and distribution, and much more. Decision Vision is presented by Brady Ware & Company.

Anomia Press publishes the award-winning and highly-addictive card games Anomia and Duple which have sold over a million copies and have been translated into more than 15 languages around the world.

Andrew started Anomia Press in May of 2009. However, a lot happened before that.

When he was 12 years old, Andrew came up with an idea for a game.  Mostly, the concept just rattled around in his head, nagging at him for years and years. Many years later, in his early 30’s, he decided to finally try and make a prototype of my idea. Five prototypes and many, many play-testing sessions later (not to mention a full-time job, a wedding, a baby, a move from Brooklyn to Boston, and another baby) Andrew realized his game, ANOMIA, was finally done.

In the spring of 2009, Andrew started Anomia Press and set out to raise enough money to pay for the first printing of ANOMIA. By the end of July 2009, he had pre-sold over 500 copies of ANOMIA and had succeeded in raising all the money needed to go into production.  The games arrived in mid-November and all 500+ copies were shipped out just in time for the Thanksgiving holidays. Word spread quickly, and Andrew sold an additional 500 copies between Thanksgiving and Christmas.

The momentum continued and by the end of 2010, ANOMIA had sold over 25,000 copies, won some major toy industry awards, and had been picked up by hundreds of stores across the United States, Canada, and Australia.

In December 2010, Andrew’s wife, Jody Burr, came on board to help with both marketing and design, not to mention Quickbooks. They have subjected their kids (and their friends) to tons of play-testing sessions, truly making Anomia Press a family business.