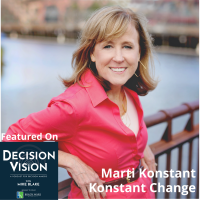 Decision Vision Episode 132: Should I Experiment with My Business? – An Interview with Marti Konstant, Konstant ChangeJohn Ray
Download Audio 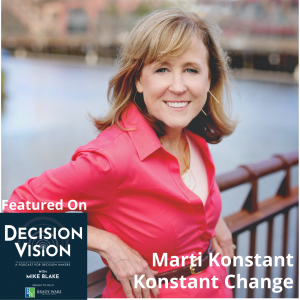 Decision Vision Episode 132: Should I Experiment with My Business? – An Interview with Marti Konstant, Konstant Change

For many business owners, the pandemic raised fresh questions about diversifying revenue and pivoting into new business lines. Workplace agility authority Marti Konstant joined host Mike Blake to discuss how and when a business should experiment, how experimentation keeps a company agile and responsive, and much more. Decision Vision is presented by Brady Ware & Company.

Konstant Change provides a simple yet powerful agility model, training, and tools to help individuals and organizations adapt to change and build powerful and relevant futures. The company also offers a career decoder framework for mid-career job seekers so they can uncover right fit roles in the next stage of their careers.

Marti Konstant is a workplace futurist with an agile mindset. She is a career growth analyst, author, speaker, and founder of the Happy Profitable Employee Project™.

What started out as a quest to fine-tune her evolving career sparked a research project, workshops, and book, where future of work and career agility are central themes. Her story-driven book, Activate Your Agile Career: How Responding to Change Will Inspire Your Life’s work, is the result of 120 interviews and custom research.