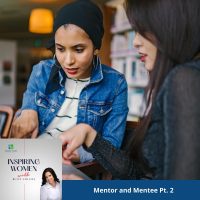 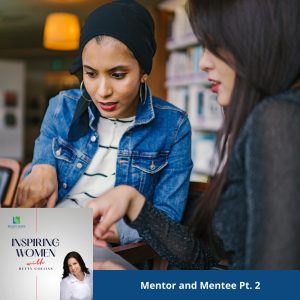 In this episode of Inspiring Women, Merry Korn and Sheryl Marrero continue the story of their mentor-mentee relationship, which began through the Women’s Small Business Accelerator.

In our previous episode, Merry Korn and Sheryl Marrero talked about their journey as a mentor and a mentee.

Merry is the owner of Pearl Interactive Network, Inc., and Sheryl is the President of SavKon Construction.

Sheryl, as the mentee, was in really, really bad shape as a business owner and reached out and said, I need a mentor. And she met Merry Korn, who’s a very successful businesswoman. She has used common sense practices, good advisors, all that kind of stuff. But Merry was not in Sheryl’s industry. Merry was a little intimidated by it, but she became a great mentor because business is business.

The key thing about their relationship that made it successful from the beginning, there was a connection. They had a great connection to the point that Sheryl, who didn’t know Merry, could be transparent, be open, and then she could actually listen and as she says, “be obedient” to and accountable to what Merry was telling her. Those were key elements of a good mentor relationship.

They also didn’t put a timetable on the relationship. They are still going strong. It’s not just about getting together. It’s not just getting coffee together. It’s just not talking. It’s about developing success. And in the case of Sheryl and Merry, Sheryl really became a completely different person as a business owner and a person. And Merry really loved the mentor role and was energized by being there with her. And there will probably be, I would say, business friends and lifetime friends.

This is why Sheryl thinks the mentoring was so impactful.

It was impactful because it actually pushed me to believe in myself. It was like it unleashed my potential that I didn’t even recognize.

We find out what Sheryl was hoping in the beginning that the mentoring would accomplish.

In the beginning, I was just hoping to break even because I was in a different mindset at the time. So initially I was thinking, if I can just break even, I’ll walk away and be done with business. But after being in the program, that changed it. I mean, it just changed everything and it just ended up being so much more.

And what did Merry want the mentoring relationship to accomplish?

One of the things I always said to Sheryl is, Sheryl, whatever happens between us, I know you’re going to be successful. And my big ask is to pay it forward. Her success as a minority woman business owner is she’s literally one in a million. It’s that rare. So my big ask of Sheryl is to pass it forward.