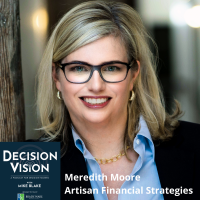 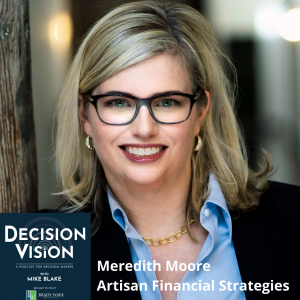 Decision Vision Episode 99: Should I Hire a Consultant? – An Interview With Meredith Moore, Artisan Financial Strategies

Meredith Moore started hiring outside consultants very early to assist with her firm’s growth. She joins host Mike Blake to discuss why she has continued this practice, why she considers it so vital for her business, pitfalls you should avoid, and more. “Decision Vision” is presented by Brady Ware & Company.

Meredith Moore brings a passion for lifelong learning to her role as Founder and CEO of Artisan Financial Strategies. She is a class of 2017 leadership Atlanta graduate and has built a practice where clients and colleagues alike appreciate Meredith’s unflagging commitment to empowering others through knowledge, skills and insights that help them meet financial and personal goals through a comprehensive and bespoke process. In addition, she has mentored dozens of other financial advisors in the industry.

Her fresh approach and insightful observations combine with 21 years of professional experience to make Meredith a compelling and sought-after speaker. She has guest lectured at Georgia Tech’s Scheller College of Business, spoken at the Wall Street Journal’s Women in the Workplace and on the WSJ Secrets of Women of Wealth podcast. She is also a contributor to Medium and Thrive Global.

As someone who’s not only beaten cancer but kicked its ass, Meredith has a growth mindset and firmly believes that perseverance and a methodical approach allow individuals to achieve any goal.

You can connect with Meredith on LinkedIn.