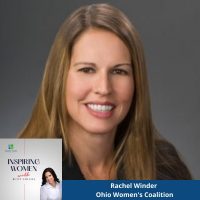 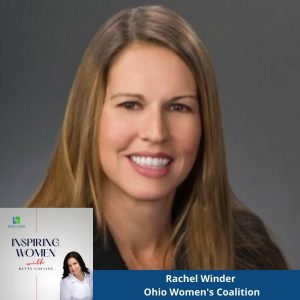 On this edition of Inspiring Women, host Betty Collins interviews Executive Director Rachel Winder on the advocacy work the Ohio Women’s Coalition performs on behalf of women throughout the state.

My guest is Rachel Winder, Executive Director at the Ohio Women’s Coalition.

What is the Ohio Women’s Coalition?

“The Ohio Women’s Coalition is a diverse, non-partisan alliance of women in business, women leaders, women business owners, and men that support the mission across Ohio who are coming together to improve the economic position for all women in our state. The OWC was created to amplify the voice of women in Ohio and to help draw attention to the unique challenges that women encounter, especially underserved women of color and women who live in underserved areas of the state, to gain access to economic opportunities in order to achieve financial stability and prosperity.”

In a very short time, the OWC continues to increase the awareness of women small business owners, and help them find funding and support that is usually elusive to them. Rachel goes in-depth about the exciting initiatives the OWC has accomplished, and what is on the horizon.

Here’s an overview of what we talk about…

Results
• As of May 2022, $2,297,012 in Women’s Business Enterprise Loans have been approved for 11 companies, and $1,490,511 Ohio Micro-Loans have been approved for 39 companies. Nearly $3 million remains available in both loan programs with an additional $5 million available next fiscal year for each program.
• There are nearly as many WBE’s certified in Ohio as MBE’s, which is a program that was established more than 40 years ago. The OWC is committed to equality and lifting everybody up!
• The State of Ohio is literally making room for Ohio women-owned businesses. Recently, members of the Minority Development Financing Advisory Board voluntarily stepped away in recognition of the lack of women-owned businesses represented. Because of our advocacy, the work of this Board has been mostly focused on women-owned business loans, and they recognized women-owned businesses were not represented equally on the Board.
• For the first time in Ohio history, in 2022, each state agency is being asked to predict how many contracts will be going to women-owned businesses during the next fiscal year.

Gain insights and connections with your Columbus professionals during this full-day event featuring:

Networking opportunities to make friends, business contacts, and
build relationships to grow your career and business!

More than 300 professionals in attendance

Customize your day with choices from 15 breakout speakers