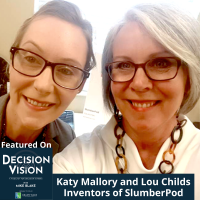 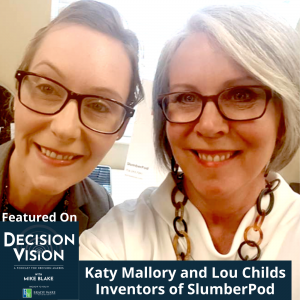 Decision Vision Episode 121:  Should I Pitch on Shark Tank? – An Interview with Katy Mallory and Lou Childs, SlumberPod

Mother-daughter duo and Shark Tank contestants Katy Mallory and Lou Childs talked with host Mike Blake about why and how they invented the SlumberPod and what makes them a great business team. They also offered a behind the scenes perspective on the popular business reality television show, including what it takes to get on the show and how they prepared for their appearance. Decision Vision is presented by Brady Ware & Company.

The idea for SlumberPod started in December 2014 when Katy and her husband and baby were visiting Katy’s mother (Lou) for the winter holidays. Because it was a packed house, the three had to share a room. The baby woke up two nights in a row—seeing her parents across the room—and refused to go back to sleep. Sleep-deprived and frustrated, Katy and her family went home a day early. Thing was … their baby was rarely a bad sleeper at home.

Katy scoured the internet for something she could bring on trips to provide her baby a private, dark place to sleep. When she didn’t find anything that fit the bill, she (like many others) resorted to homemade solutions to provide a visual barrier between her and her baby. The homemade solution worked but wasn’t safe, especially private or easy to set up.

While Katy was on maternity leave with twins in the spring of 2016, she and Lou decided it was time to create a safe, easy and portable solution to help make vacations more restful and fun for everyone—and SlumberPod was born!

They’ve had a ton of support and encouragement by way of friends and family, product designers, fellow entrepreneurs, advisors, and are proud to bring SlumberPod to market.

Between the two of them, Katy and Lou have nine children and lots of experience traveling with them.

(You can find a clip of Katy and Lou’s Shark Tank pitch here.)