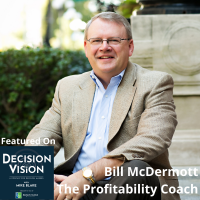 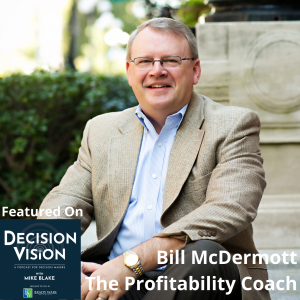 Decision Vision Episode 103:  Should My Company Borrow Money? – An Interview with Bill McDermott, The Profitability Coach

Bill McDermott, Profitability Coach and ex-banker, speaks with host Mike Blake on when and how business owners should borrow money for their business. Bill also breaks down how bankers assess business borrowers and make lending decisions, various types of debt, one type of business loan he considers predatory, and much more. “Decision Vision” is presented by Brady Ware & Company.

Bill McDermott is the Founder and CEO of McDermott Financial Solutions, serving as a profitability coach to his clients. When business owners want to increase their profitability, they don’t have the expertise to know where to start or what to do. Bill leverages his knowledge and relationships from 32 years as a banker to identify the hurdles getting in the way and create a plan to deliver profitability they never thought possible.

Bill currently serves as Treasurer for the Atlanta Executive Forum and has held previous positions as a board member for the Kennesaw State University Entrepreneurship Center and Gwinnett Habitat for Humanity and Treasurer for CEO NetWeavers. Bill is a graduate of Wake Forest University and he and his wife, Martha have called Atlanta home for over 40 years. Outside of work, Bill enjoys golf, traveling, and gardening.