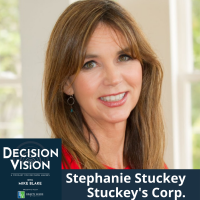 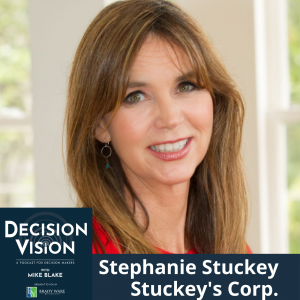 Decision Vision Episode 151:  Should I Rebrand My Company? – An Interview with Stephanie Stuckey, Stuckey’s Corporation

When Stephanie Stuckey bought Stuckey’s Corporation in 2019, she knew it was a struggling brand, but she was determined to reclaim the business with the trademark family name. She got to work rebuilding the company, drawing on all her legal, political and leadership experience. In this conversation with host Mike Blake, Stephanie shares the challenges of rebranding her company, updating its focus while maintaining the founder’s vision, why she calls Stuckey’s a startup, and much more. Decision Vision is presented by Brady Ware & Company.

W.S. “Sylvester” Stuckey, Sr. founded Stuckey’s as a roadside pecan stand along Highway 23 in Eastman, GA in 1937. With a truck and the loan (from his grandmother), W.S. drove around the countryside and bought pecans from local farmers to sell at his stand, along with local honey and souvenirs. His wife, Ethel, added her delicious homemade candies – southern delicacies like pralines, Divinities, and our iconic Pecan Log Rolls.

Through grit and determination, the Stuckeys grew the stores from these humble beginnings to a roadside empire. At its peak in the 1960s, the little pecan company had become an integral part of the American road trip. It boasted 368 stores in over 30 states, each offering kitschy souvenirs, clean restrooms, Texaco gas, and of course, our famous candies.

The company was sold in 1964 but is now back in family hands and poised for a comeback.

Stephanie Stuckey is CEO of Stuckey’s, the roadside oasis famous for its pecan log rolls.  Stephanie aims to continue the legacy started by her grandparents by providing a fun and quality experience for the roadside traveler through our brick-and-mortar locations, as well as expanding markets for Stuckey’s pecan products via e-commerce and other outlets.