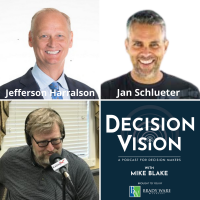 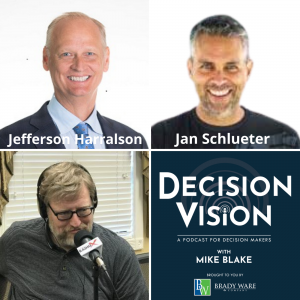 Decision Vision Episode 122:  Should I Relocate My Business? – An Interview with Jefferson Harralson, United Community Banks, and Jan Schlueter, Darvis

Jefferson Harralson is Executive Vice President and Chief Financial Officer of United Community Banks Inc.  Jefferson has more than 25 years of experience in the financial services industry and has been with UCB since 2017.

Headquartered in Greenville, South Carolina, United has $18.6 billion in assets, $2.7 billion market cap and 161 offices in Florida, Georgia, North Carolina, South Carolina and Tennessee along with a national SBA lending franchise and a national equipment lending subsidiary. In 2021, J.D. Power ranked United highest in customer satisfaction with retail banking in the Southeast, marking seven out of the last eight years United earned the coveted award. United was also named “Best Banks to Work For” by American Banker in 2020 for the fourth year in a row based on employee satisfaction.

Forbes included United in its inaugural list of the World’s Best Banks in 2019 and again in 2020. Forbes also recognized United on its 2021 list of the 100 Best Banks in America for the eighth consecutive year. United also received five Greenwich Excellence Awards in 2020 for excellence in Small Business Banking, including a national award for Overall Satisfaction.

By tracking situations and objects, Darvis turns the real world into useful data. Its mission is to enable continuous understanding and optimization of health care services.

Darvis, which stands for Data Analytics Real World Visual Information System, uses state of the art patented artificial intelligence-powered technology to give rooms and objects a voice, analyzing optical sensors to provide contextual insights that enable hospitals and care facilities to build and manage safe and optimal flows of medical equipment and services.