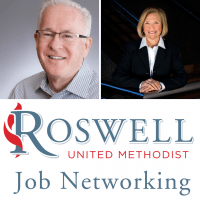 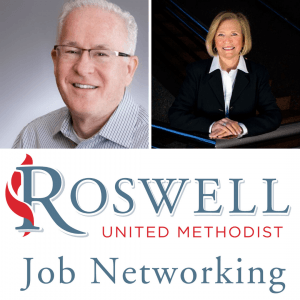 RUMC Job Networking has touched literally thousands of lives in the well over two decades of its existence. Jay Litton and Katherine Simons, co-leaders of this ministry of Roswell United Methodist Church, join the show to talk about how they have morphed their programming to a virtual platform, advice they’d offer job seekers in this economic climate, and much more. The host of “North Fulton Business Radio” is John Ray and the show is produced virtually from the North Fulton studio of Business RadioX® in Alpharetta.

For over 25 years RUMC Job Networking has been providing employment workshops, ‘mini’ job fairs, and evening dinners with keynote speakers to those in need of employment or job readiness. RUMC Job Networking exists to teach job seekers how to begin and sustain a job search while providing emotional support and encouragement. They provide this support through mentoring, community prayer partners (all faiths and denominations), and support groups.

Since 2010, they have been training on job readiness while making states and other countries aware of the need for Job Networking including: Holland, Singapore, Portugal and London. The impact of this program has reached the attention of ABC World News, Fox 5 News, the Wall Street Journal, and the Atlanta Journal. Their interview on National Public Radio discussed how a community works together to help the unemployed. They have developed close relationships with the state and federal departments of labor and have attended events hosted by the White House and the Community Partnerships for Faith Based Programs. They have reinforced that we are filling a gap they cannot serve.

To connect with RUMC Job Networking, visit their website to find their next meeting and agenda.

Jay Litton is a Senior Enterprise Account Executive at Sumo Logic. He is a seasoned enterprise sales/sales management executive with a track record of success as both an individual contributor and in sales leadership roles. During his career, Jay has achieved top performing status during at both start ups and multi-billion dollar organizations.


He has been providing career advice at RUMC Job Networking since inception of the ministry. With Katherine Simons, he co-leads a team of over 300 volunteer professionals who donate their time with an eight-hour agenda twice each month. Jay is also known as the creator of the WoW! Interview™ having taught over 10,000 professionals in career transition.

Jay previously appeared on Business RadioX® in 2017; you can find that episode here.

Katherine Simons is the previous owner of DDS Staffing Resources specializing in the temporary and permanent staffing of medical and dental staff . She also partnered with her son-in-law Tim Rush, in ownership of a Healthcare Job Board, Healthcare Staffing Innovations, LLC which features www.advancedpracticejobs.com, the largest and most successful job board highlighting nurse practitioners and physician assistants.

In addition to co-leading RUMC Job Networking with Jay, Katherine has served as Chairperson for New Members and Assimilation at Roswell United Methodist Church, a 6000 member congregation, She serves on the Board of Directors for the Greater North Fulton Chamber of Commerce and on the HomeStretch Board of Directors.

Katherine is author of Loving Your Neighbor, A Faith Community’s Response to the Unemployment Crisis, written in 2010, but so timely in our current environment.

Show Notes from Jay and Katherine: 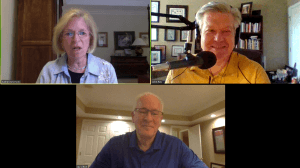