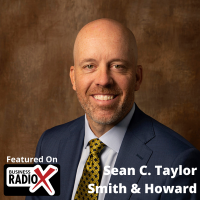 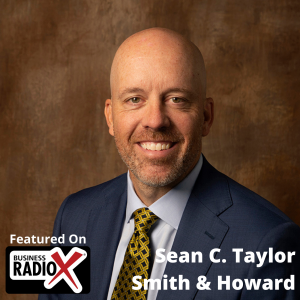 Sean Taylor, Managing Partner with Smith & Howard, joined host John Ray to discuss how his firm has navigated the uncertainties of the pandemic, managing remote employees while maintaining firm culture, opportunities and challenges in 2021, and much more. “North Fulton Business Radio” is produced virtually from the North Fulton studio of Business RadioX® in Alpharetta.

Sean Taylor became Managing Partner of Smith & Howard in January 2019 after 25 years of leadership progression in the Assurance Services group. He joined Smith & Howard as an intern and was ultimately named Partner in charge of the Assurance Service group in 2010, a role he held until becoming Managing Partner in 2019. Sean will drive the vision, innovation and growth of the firm and its people through the next stage of the firm’s life.

Sean was named an Atlanta 2020 Most Admired CEO by the Atlanta Business Chronicle in recognition of his leadership. Sean is called on to present to many for-profit and nonprofit businesses, lenders, and other professional service providers. He has both served on and moderated numerous workshop and conference panels, has presented on the effects of healthcare reform, presented at Smith & Howard’s “Blueprint for Understanding Contractors” workshop to construction companies and commercial lenders, and has presented on several complex accounting principles to local and national audiences. As an Assurance professional, he has spent a career providing advisory, audit, review, attestation, and other assurance services for privately-held businesses and nonprofit organizations.

Sean is actively involved as a multi-year member of various committees at Dunwoody United Methodist Church (DUMC), including Finance, Staff Parish Relations, Leadership Roundtable, Organ and Evangelism. Sean was also selected to chair the Strategic Planning Task Force for DUMC in developing the church’s current five-year strategic plan. He recently completed service as co-chairman of DUMC’s $5.6 million Moving Forward Together Capital Campaign. Sean served seven years on the Council on Finance and Administration at the North Georgia Conference of the United Methodist Church, including time as the Vice Chair and Chair. He also serves on the Finance Committee for Wesleyan School, a private K-12 college preparatory school and began a five year term on the school’s Board of Trustees in September 2019.

With his personal time, Sean is an active volunteer in the community. He was the recipient of the Georgia Society of Certified Public Accountants’ 2020 Public Service Award, the organization’s annual Public Service Award that recognizes a member who has distinguished himself or herself in public service activities at the local, state, regional or national level. In 2012, Sean co-founded FoodStock, an annual food packaging event in Dunwoody, Georgia where over 1,000 community members come together annually to package over 300,000 meals in one day for children in school feeding programs around the globe. This is the largest single day food packaging event of its kind in Georgia and, to date, this event and other food packaging events in the Dunwoody community associated with FoodStock have packaged over 2.4 million meals. Additionally, Sean serves as a mentor to 13 teenage boys through a group he founded called Fit 4 Life, meeting weekly to discuss various aspects of faith and life for these 13 young men.

North Fulton Business Radio” is hosted by John Ray and produced virtually from the North Fulton studio of Business RadioX® in Alpharetta. You can find the full archive of shows by following this link. The show is available on all the major podcast apps, including Apple Podcasts, Spotify, Google, Amazon, iHeart Radio, Stitcher, TuneIn, and others.