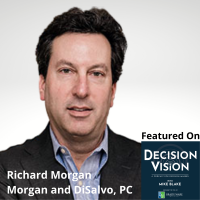 Decision Vision Episode 131: Should I Set up a Trust? – An Interview with Richard Morgan, Morgan and DiSalvo, P.C.John Ray
Download Audio 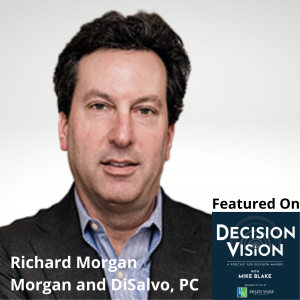 Decision Vision Episode 131: Should I Set up a Trust? – An Interview with Richard Morgan, Morgan and DiSalvo, P.C.

Trusts are not just for the wealthy, says Richard Morgan, an attorney with decades of estate and tax planning experience. He joined Decision Vision host Mike Blake to break down the basics of trusts, when and how they are formed, how they serve the desires of those who create them, and much more. Decision Vision is presented by Brady Ware & Company.

Morgan and DiSalvo is a full service, high-end, estate and tax planning law firm. Their planning is individualized for their clients and clients are not shoved into pre-existing form documents. Service is a high priority, and they treat clients like family. Life changes, and Morgan and DiSalvo helps clients plan for it.

Their areas of specialty are estate planning, special needs planning, probate and administration, and dispute resolution.

Richard M. Morgan has been practicing law in Georgia since 1987. Richard founded the award-winning Alpharetta law firm of Morgan & DiSalvo, P.C. in 1995 to help individuals and families plan and prepare for the many changes that life brings. Morgan & DiSalvo is recognized as a U.S. News & World Report and Best Lawyers.com “Best Law Firm” since 2013. Morgan & DiSalvo received the highest “Tier 1” rating in Trusts and Estates Law, a distinction held by only 23 law firms in Georgia.

Richard prides himself on bringing peace of mind to individuals and families by helping them prepare for significant life events. In addition to the primary practice areas of the firm, Richard also specializes in finding creative solutions for clients in the areas of estate & tax planning, estate & trust dispute resolution, business succession planning, planning for special needs beneficiaries, creditor protection, charitable gift planning and tax controversies.

Richard’s work is differentiated by his level of service and attention to detail. His technical and analytical capabilities and problem-solving approach are unique among attorneys. A leader in his field, Richard is past president of the Taxation Sections of both the Georgia and Atlanta Bar Associations, the Estate Planning & Probate Section of the Atlanta Bar Association, the North Georgia Estate Planning Council and the Georgia Planned Giving Council. Richard serves on the Executive, Legislative and Georgia Trust Code Revision committees of the Fiduciary law section of the Georgia Bar Association. Richard also serves on a two member sub-committee of the Fiduciary Law Section to propose a Technical Corrections Bill to improve the 2017 Georgia Uniform Power of Attorney Act.

In 2014, Richard was elected as a Fellow in The American College of Trust and Estate Counsel (ACTEC). This is the most prestigious group of Trusts and Estates attorneys in the country, with only 59 Fellows in the State of Georgia. ACTEC membership is only offered to those who have provided substantial contributions to the field of trusts and estates law. Richard has used his charitable gift planning expertise over the years by serving as the chairman or member of professional advisory committees of several large Atlanta organizations including the Jewish Federation of Greater Atlanta, Jewish Family & Career Services, the Community Foundation of Greater Atlanta and YMCA of Metropolitan Atlanta.

Richard loves life and all that it has to offer, but his greatest accomplishments have all related to his wonderful and loving family, including his incredible wife and three children, and of course, now two Goldendoodles.