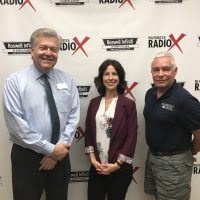 Charles Gridley, along with his son Clay, are the co-owners of Six Bridges Brewing. They are Johns Creek’s first and only brewery and taproom. Opened in December, 2018, Six Bridges Brewing currently brews on a 30 BBL brewhouse and a 2 BBL pilot system.  They’re dog and kid-friendly both outside and inside the taproom, and offer multiple TVs, video games, cornhole, board games, and of course, cold beer.

Kathryn Woods founded Confident Communications in late 2016. Kathryn provides communication coaching and speaking training to show her clients how to amplify their voice in order to amplify their impact. As a recovering shy person, Kathryn understands firsthand the challenge that lacking confidence can present when communicating. This has led her on a lifelong journey to gain that confidence first for herself and then for her clients. Kathryn began her 20+ year career as a licensed certified speech language pathologist which is where helping people communicate more clearly became the focus of her work. Through customized coaching and training programs, Kathryn teaches her clients the simple tools and techniques they need to captivate their listeners, grow their business, and achieve their goals.

To find out more, go to the Confident Communications website.