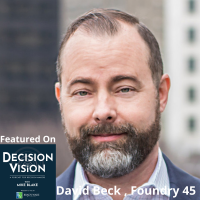 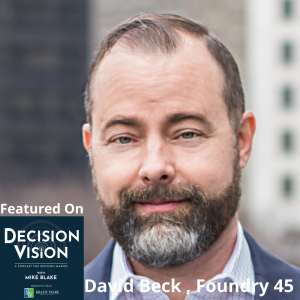 Decision Vision Episode 139:  Should I Incorporate Virtual Reality into My Corporate Training? – An Interview with David Beck, Foundry 45

David Beck, Founder of Foundry 45, and host Mike Blake discuss virtual and augmented reality and its potential for corporate training. They describe the technology, cover the difference between augmented and virtual reality, its use case for training, frontiers and limitations of the technology, the impact of the pandemic on the industry, and much more. Decision Vision is presented by Brady Ware & Company.

Foundry 45 is passionate about using leading-edge technologies to create better process training outcomes for enterprise clients. We are a team of strategists, technologists, engineers, creatives, computer programmers, and project managers who are all driven to create powerful, immersive VR experiences.

We have deep expertise creating scalable, effective procedural training solutions that focus on the learning objectives and the needs of the trainees. Our innovative process and approach is rooted in the importance of integrating VR solutions into a holistic, manageable training initiative.

We embrace collaboration within our team and with our client partners. Being accessible, transparent, and honest is the approach that allows us to deliver great work through a nimble and iterative process.

Dave Beck is a Founder and Managing Partner at Foundry 45, an immersive technology company that develops enterprise-level virtual reality training experiences. His company has built over 250 experiences for notable clients such as AT&T, Coca-Cola, Delta, and UPS.

A passionate advocate of his industry, Dave is a frequent speaker on topics related to technology and the future of learning.

Before starting Foundry 45, he held leadership positions in both training and technology. Dave also serves as a board member at Georgia Tech, where he earned his MBA, the Metro Atlanta Chamber of Commerce, and the MAK Historic District.