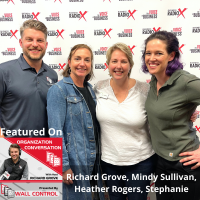 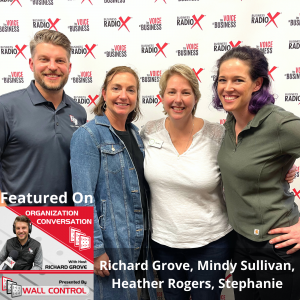 Heather Rogers, Owner, and Mindy Sullivan, Interior Designer, of Simply Organized joined Richard Grove and Stephanie of Uncommon Outpost on this episode of Organization Conversation. They discussed some common issues they encounter helping people organize their homes and moves, NAPO (the National Association of Productivity and Organizing Professionals), different applications for Wall Control in the home, common obstacles their clients face, when to get rid of possessions, and much more. Organization Conversation is broadcast from the North Fulton studio of Business RadioX® inside Renasant Bank in Alpharetta.

Simply Organized was founded to help people simplify their lives. Their typical client usually feels overwhelmed in their home or office or wants more time in their day and less stress in their lives.

They specialize in helping people who work from home, anyone who is getting their home ready to sell, needs packing or unpacking help, and in time and routine management coaching. They serve the Atlanta metro area, including Cherokee, Cobb, Dawson, North DeKalb, Forsyth, North Fulton, Gwinnett, and Hall.

The Simply Organized team has the training and skills to help you organize everything from your hectic schedule, family, home, and office in all metro Atlanta areas. They only hire experienced professional organizers so you can be certain anyone from Simply Organized knows how to de-clutter, sort, pack, unpack, pre-stage, and help with spatial planning.

Heather Rogers is a professional organizer, owner of Simply Organized, and author of “A Simplified Life”. She and her team specialize in helping people decrease the clutter in their lives, create a more organized environment, manage their time more effectively, increase productivity and maintain calm in the midst of a busy life.

A Georgia native, Heather has worked in the insurance and financial services industries, as well as in customer service and sales. She has a passion for helping people and a keen sense of spatial planning and organizing. Ironically, she earned a bachelor’s degree in risk management from the University of Georgia. Isn’t being disorganized one of the greatest risks in life?

She is the past president of the National Association of Professional Organizers Georgia (NAPO) and frequently speaks to groups about the benefits of time management and the costs of disorganization.

Mindy Sullivan joined the Simply Organized team in 2020.  Mindy comes with 20 + years of interior design experience and an aptitude for organization and spatial planning. She has a great attitude and fantastic work ethic!

Mindy is a professional interior decorator for over 20 years with clients across the country. She loves nothing more than helping a client feel good in their own space and keep it that way!  Her design background is from the Art Institute of Atlanta fuels my ability to make a space make sense while looking good in the process. Whether it’s organizing drawers and closets or finding a place for all your beloved pet’s gear, you can be sure that you will be proud to show off every corner of your home.