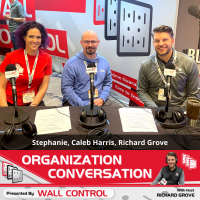 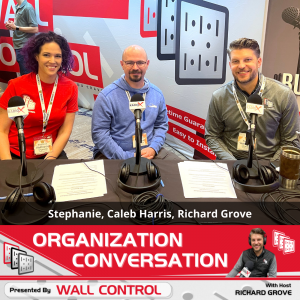 Caleb Harris, owner of YouCanMakeThisToo joined host Richard Grove and Stephanie from Uncommon Outpost on this live episode of Organization Conversation, broadcast from WORKBENCHcon 2022. Caleb is a content creator through YouCanMakeThisToo and builds custom furniture through The Custom Furniture Guy. He talked about how to embrace failure, his path to making, going to law school, getting organized, and much more.

Organization Conversation is produced by the North Fulton studio of Business RadioX® inside Renasant Bank in Alpharetta.

For Caleb Harris, making and teaching are two of his biggest passions, second only to being a husband and father.

YouCanMakeThisToo is about sharing what he has learned along the journey of making, whether that’s furniture, content, or business; and connecting with like-minded individuals who are obsessed with creating and sharing.

He was raised in a rural county in Tennessee with one of the poorest school districts in the country. His mother chose to homeschool him, and that allowed him to accelerate his schooling and do unconventional things, like spend four months working and living with various uncles were who professional contractors, and study during off time.

Caleb started college at Austin Peay State University shortly before he turned 17. In 2008, he graduated with a degree in Criminal Justice: Homeland Security and was commissioned in the Army as an Engineer Officer. After a year of training, he moved to Germany and immediately deployed to Iraq. Two years later he deployed to Afghanistan.

After redeploying from Afghanistan, Caleb moved back to the states and was stationed at Ft. Leonard Wood, Missouri. After six and a half years of service, he decided to resign his commission to spend more time with his family. Ideally, he wanted to start his own business and be able to set his own hours.

In 2014, he moved to Memphis and started law school. His second year of law school he discovered content creation as a career option, which opened up a new world of possibilities.

Content creation would allow him to create his own business, make things, teach others, and support my family. In his third semester of law school he launched his YouTube channel and started learning how to shoot and edit video. 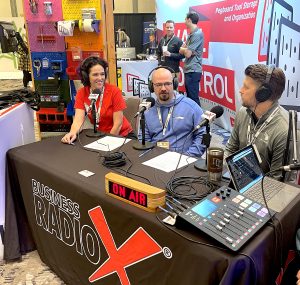 Organization Conversation features interviews with movers and shakers in storage and organization, from professional organizers to the creative and talented Brand Ambassadors who use Wall Control products every day. You’ll hear tips, tricks, and how-tos for storage and organization, as well as receive first access to Wall Control promotions. We talk with our suppliers and partners to give you a look behind the scenes at how we operate, what makes our family-owned and operated brand tick, and some of the fun and interesting insights that go into making our business run. We love our guests, as they are engaging and entertaining with interesting experiences to share. By focusing on those guests and the amazing stories they tell, we hope you will be enriched and find your time listening to the Organization Conversation podcast as time well spent.