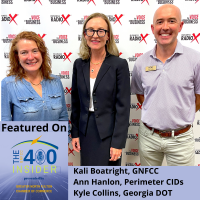 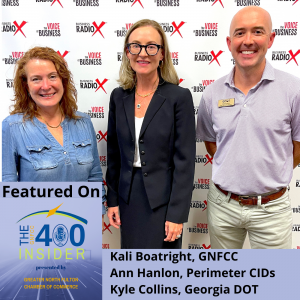 Kyle Collins, Georgia DOT, and Ann Hanlon, Perimeter CID, joined host Kali Boatright on Georgia 400 Insider to share updates on the 285-400 interchange construction project. Kyle and Ann discussed the history of this multi-year project, completed exits and on-ramps which have eliminated dangerous merging of traffic around the interchange, coming lane reductions on 285 which will cause significant traffic delays, and much more.

The Georgia Department of Transportation plans, designs, constructs, maintains, and improves the state’s roads and bridges, and interstate highways; and provides planning and financial support for other modes of transportation including rail, transit, general aviation, and bicycle and pedestrian programs.

The department is also involved in waterways, including the Savannah and Brunswick ports and Intracoastal Waterway.

Kyle is in his eighth year of state transportation agency communications work with a new dynamic role as Communications Program Manager.

His position manages and assists in directing the Department’s communications initiatives focused on public outreach/education around the $11 billion Major Mobility Investment Program, Georgia Express Lanes and other high-profile design-build projects, which are transforming Georgia’s transportation network – the nation’s tenth largest.

The PCID is home to the largest retail mall in the state, dozens of dining locations, premier retailers, and multi- and single-family housing options, the Center is one of the Southeast’s leading live, work, and play communities.

As Executive Director for the Perimeter Community Improvement Districts (PCIDs), Ann Hanlon is in charge of the organization’s daily operations, as well as its investments in transportation infrastructure. The CIDs have an annual operating budget of over $8 million.

Previously, Ann was the Executive Director of the North Fulton CID for 13 years, beginning when it was a start-up. Prior to entering the CID space, Ann served as a Senior Program Specialist at the Atlanta Regional Commission. She began her career in the private sector, as a Research and Development Analyst with Press Ganey & Associates, a healthcare consulting firm in South Bend, Indiana.

A native of South Georgia, Ann received a Bachelor of Arts degree with a double major in Government and Computer Science from the University of Notre Dame and a Masters of Public Administration degree in Management and Finance from Georgia State University.

Ann was honored as the “Woman of the Year” by the Women’s Transportation Seminar Atlanta Chapter in November 2016. In April 2015 and again in 2017, Governor Nathan Deal appointed Ann to the Board of Directors for the Georgia Regional Transportation Authority where she serves on the Projects and Planning committees. Ann was named a “Notable Georgian” by Georgia Trend Magazine in 2017, one of the Atlanta Business Chronicle’s “Women Who Mean Business” in 2015 and as one of Georgia Trend Magazine’s “40 under 40” in 2012 and 2018.

In 2020, Ann was appointed by CEO Michael Thurmond to the DeKalb County COVID19 task force, and continues to serve in that capacity as a representative of large business interests in Perimeter during the pandemic. Ann is a graduate of the Regional Leadership Institute of the Atlanta Regional Commission (2010) and Leadership North Fulton (2006).

Personally, Ann is a volunteer with the Girl Scouts of Metro Atlanta, a member of All Saints Catholic Church, and a sustainer with the Junior League of Atlanta.

She lives in Dunwoody with her husband, Michael, and their two daughters. 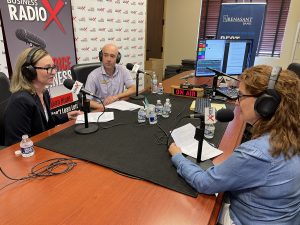