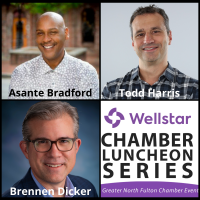 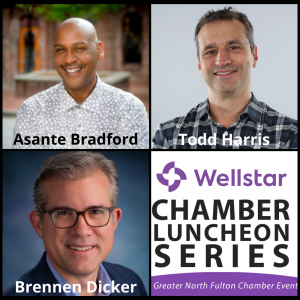 Metro Atlanta–and North Fulton specifically–are home to a thriving esports industry, and all the necessary ingredients are in place for continued growth, according to panelists speaking at this GNFCC Wellstar Chamber Luncheon series. Todd Harris, founder of Skillshot Media, and Brennen Dicker of Creative Media Industries Institute, joined moderator Asante Bradford, Georgia Department of Economic Development, to discuss the dynamics of the region’s esports industry and why its future is bright.

Asante Bradford is Project Manager for Digital Entertainment and Emerging Media for the Georgia Department of Economic Development, the sales, and marketing arm for the State of Georgia.

Asante helps promote the growth of the digital media industry as well as identify initiatives that will help grow businesses for the state of Georgia in interactive entertainment and eSports. He also helps educate potential prospects and provides clients with information about the Georgia Entertainment Industry Incentives Act.

His area of concentration with the Global Commerce office is to increase the impact of interactive entertainment for the State of Georgia as well as being a dedicated liaison to assist with promotions, logistics, and business development for attracting digital media companies outside the state to relocate in Georgia.

Esports is becoming an economic driver for Atlanta with Fortune 500 companies, a thriving tech center, film, TV, and videogame tax incentives all play into the mix. Georgia esports is also a sanctioned activity at the local high school level with a focus on STEM exposure.

Todd Harris (@toddalanharris) is an accomplished entrepreneur who has been leading video game and esports businesses for 15 years and involved with technology product startups for 25 years. Todd co-founded Hi-Rez Studios, one of the largest video game studios in the Southeast and is currently Founder & CEO of Skillshot Media, a leading esports infrastructure and production company, President of the North American Scholastic Esports Federation (NASEF), and co-owner of esports professional team Ghost Gaming.

Ghost Gaming is an Atlanta-based professional esports team and gaming lifestyle brand that has won 13 tournament championships and cultivated a fan base of over 5 million.

NASEF is the leading scholastic esports solution for high school students, providing opportunities for all students to use esports as a platform to acquire critical communication, collaboration, and problem-solving skills.

Throughout his career, Todd has garnered industry recognition including “2019 Most Admired CEO” by the Atlanta Business Chronicle as he works with partners toward advancing the esports industry.

Brennen Dicker, a film and television professional with 25 years of experience, is Executive Director of the Creative Media Industries Institute at Georgia State University. Before joining Georgia State, Brennen was the General Manager for SIM International (Post) Atlanta. SIM provides production and post-production services for many episodic television series and feature film productions, including; “Stranger Things”, “Watchmen”, “The Gifted”, “Dynasty”, “Good Girls”, “True Detective” S3, as well as the blockbuster “Get Out”.

Brennen previously served as Director of Post Production Sales at Crawford Media Services, has broad experience in all aspects of film and television production, and deep ties to Atlanta’s production community. He worked with networks – National Geographic, HGTV, and Discovery and also with series “The Walking Dead” and “Vampire Diaries” while at Crawford.   Earlier in his career, he was executive producer and principal of American Mongrel Productions (Chicago). He was the Pennsylvania Council on the Arts Fellowship Recipient in 2001, and 2018 inaugural Women in Film and Television ( WIFTA – Atlanta) Gallantry Award winner.

Brennen is a current member of the Georgia Chamber of Commerce Screen Coalition Committee and is on the board for the Atlanta Esports Association (AEA). He chairs the CMII Working Group which is comprised of leaders in film, television, gaming, and music for the state of Georgia. He also serves on the Board of Directors for The Atlanta Jewish Film Festival.

He has served as Chair of the Savannah College of Art and Design (SCAD) Atlanta Advisory Council, and as Chair of Gov. Relations with the Georgia Production Partnership (GPP) board, and was the Chair for the 2018 and 2019 Atlanta Jewish Film Festival. He has also served on the board as Vice Chair for The Frazer Center and served on the Executive Board for the DeKalb Chamber of Commerce.