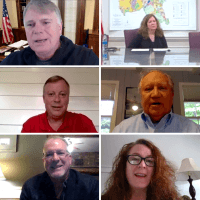 On this special edition of “The GNFCC 400 Insider,” we were joined by five North Fulton mayors for a roundtable offering updates on Covid-19 crisis management, recovery plans and potential policy changes. Mayor Jim Gilvin of the City of Alpharetta, Mayor Joe Lockwood of Milton, Mayor Jim Still of the City of Mountain Park, Mayor Lori Henry of the City of Roswell, and Mayor Pro Tempore John Paulson of the City of Sandy Springs all joined the call and answered questions on how they are leading their cities during this crisis and recovery. The panel moderator was Trey Ragsdale, co-chair of the GNFCC Government Affairs Committee

The host of “The GNFCC 400 Insider” is GNFCC CEO Kali Boatright and the show is presented by the Greater North Fulton Chamber of Commerce and produced by the North Fulton studio of Business RadioX®.