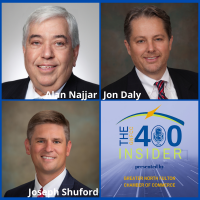 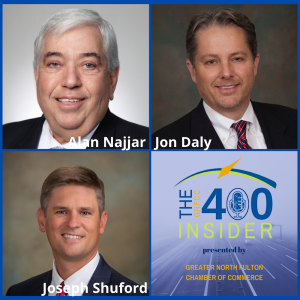 Alan Najjar, Chair of GNFCC’s Economic Task Force for Cash Flow & Liquidity, hosts a roundtable of SBA loan experts, with Jon Daly, Renasant Bank, and Joseph Shuford, Synovus Financial, joining the show. They discussed questions on PPP second round, how guidance rules differ from first round PPP, forgiveness questions on PPP loans, and much more. “The GNFCC 400 Insider” is presented by the Greater North Fulton Chamber of Commerce and produced by the North Fulton studio of Business RadioX®.

Alan Najjar has overseen the business development efforts of Smith & Howard since 2011. He started his career in banking after graduating from the University of Georgia. A veteran of the Atlanta banking and business community, Alan has held executive level leadership positions at SunTrust Bank and other Georgia financial institutions. Prior to joining Smith & Howard, he was the EVP and Chief Operating Officer of an Atlanta-based financial services company.

Alan is the former Chair of the Board of Directors for The Greater North Fulton Chamber of Commerce and is a trustee emeritus for Georgia Gwinnett College Foundation and Community Foundation for Northeast Georgia. He is active in numerous civic, social, and academic organizations. Alan and his wife, Donna, are long-time residents of Gwinnett County, and when away from the office, Alan most enjoys sunrises on the lake and time with his family.

Jon Daly is Executive Vice President, Director of SBA Lending, for Renasant Bank. Renasant Bank has humble roots, starting in 1904 as a $100,000 bank in a Lee County, Mississippi, bakery. Since then, Renasant has grown to become one of the Southeast’s strongest financial institutions with over $13 billion in assets and more than 200 banking, lending, wealth management, and financial services offices in Mississippi, Alabama, Tennessee, Georgia and Florida. All of Renasant’s success stems from each of their banker’s commitment to investing in their communities as a way of better understanding the people they serve. At Renasant Bank, they understand you because they work and live alongside you every day.

Joseph Shuford is the Director of Government Guaranteed Lending for Synovus. Synovus Financial Corp. is a financial services company based in Columbus, Georgia, with approximately $51 billion in assets. Synovus provides commercial and retail banking, investment, and mortgage services through 300 branches in Georgia, Alabama, South Carolina, Florida, and Tennessee. Synovus Bank, a wholly owned subsidiary of Synovus, has been recognized as one of the country’s “Most Reputable Banks” by American Banker and the Reputation Institute. Synovus is on the web at synovus.com, and on Twitter, Facebook, LinkedIn, and Instagram.

Topics Discussed in this Show Include: