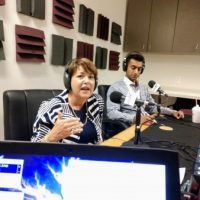 The ‘Stop the Bleed’ campaign was developed by the American College of Surgeons in 2013 – just a few months after the active shooter disaster that took place at Sandy Hook Elementary School in
Connecticut. ACS convened a joint committee to create a protocol for national policy to enhance survivability from active shooter and intentional mass casualty events. In addition to physicians, this group included representatives from the federal government, the National Security Council, the U.S. military, the FBI, and emergency medical response organizations. This effort served as the
genesis for the Stop the Bleed campaign, which was officially launched by the White House in 2015.
The Stop the Bleed campaign trains, equips, and empowers people to help during a bleeding emergency before professional help arrives – keeping in mind that a person can die from blood loss
within five minutes.  With the support of MAG’s Medical Reserve Corp and other key stakeholders, the Georgia Society of the American College of Surgeons secured a grant from the American College of Surgeons to promote the Stop the Bleed campaign in Georgia. The Georgia Trauma Commission subsequently added one million dollars to its budget to purchase trauma kits for public schools and other public places in the state.

Dr. John Harvey is the medical director of the Medical Association of Georgia’s Medical Reserve
Corps, which is prepared to respond to natural disasters and disease outbreaks in the state. Dr.
Harvey has been a general and trauma surgeon for more than 25 years. MAG’s former president is
the chief of surgery at the Gwinnett Medical Center. He is also a colonel and command surgeon in the
Georgia State Defense Force.
Kathy Browning is the executive director of the Georgia Society of the American College of
Surgeons, which is the largest professional organization for surgeons in the state. She oversees the
organization’s legislative, communications, marketing, and grassroots efforts.
Dr. Shoheb Ali is a resident in internal medicine at Gwinnett Medical Center. As a member of the MAG
MRC, he gave a Stop the Bleed presentation and training demonstration during MAG’s legislative
seminar in June. It is also worth noting that Dr. Ali is the chair of MAG’s Resident Section.