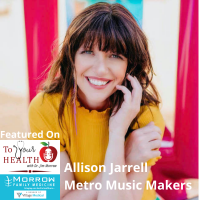 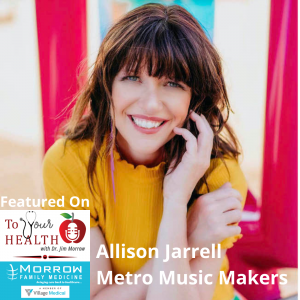 Allison Jarrell, Founder and CEO of Metro Music Makers, was Dr. Jim Morrow’s guest on this episode of To Your Health. Allison defined music therapy, talked about working with both elderly and neonate clients, the impact of music therapy on behavior, various other therapy methods, and much more.

To Your Health is brought to you by Village Medical (formerly Morrow Family Medicine), which brings the care back to healthcare.

Since beginning with a focus on in-home private instruction, Metro Music Makers has expanded to offer our services online all over the country, and to schools and healthcare providers as well.

Their team of trained, dedicated, and passionate teachers have all received extensive training in teaching online and in-person, and they bring their passion for music and education into homes and lives everywhere.

MMM’s mission is to extend the benefits of musical ability to people of all ages and abilities through superior music instruction and therapy. Their students can study virtually any instrument, and they offer multiple performance opportunities throughout the year, including traditional recitals, festivals, and community events, as well as virtual recitals and showcases for our online students.

They believe that music is for everyone and that any individual is capable of learning how to play an instrument regardless of age, gender, skill level, disability, and ethnic background. To ensure that they uphold the highest standards in music education, they provide a professional development program for their instructors to cover topics related to music and the fine arts, teaching music, learning styles, child development, online teaching, and business basics for professional musicians.

Allison Jarrell founded Metro Music Makers as a private Atlanta-based music studio offering in-home music lessons. She has been teaching since 1992 (sometimes as many as 78 students per week herself), with students ranging from 3 years of age to senior citizens, and those with special needs. In addition to overseeing a variety of instructors in the Metro Music Makers family, she is a board-certified Music Therapist licensed in the State of Georgia. Allison’s music therapy experience includes working in special needs classes, in private behavioral therapy and research with children diagnosed with autism, in music therapy and research with neonates, as a music therapist at a drug and alcohol rehab for teens, and as a music therapist in mental health settings working with adults diagnosed with a range of disorders including schizophrenia, PTSD, depression, bipolar disorder, anxiety, and dissociative disorders.

Allison’s flexibility working in diverse positions and environments gave her the training needed to begin Metro Music Makers in 2002. As parents learned about her music therapy background, she began to get requests for adaptive lessons for students who might not otherwise find success in traditional lessons.

Allison’s students have achieved many honors over the years. She has seen over 225 of her students make top marks in the National Piano Guild Auditions and National Federation of Music Clubs Festival since 2003.

Allison believes that the process of learning how to play a musical instrument and learning how to create music relates to everything else that we accomplish in life. “We are teaching the future leaders and innovators of tomorrow,” she says. “As a teacher, when I really think about that and about the influence that lessons may have in my students’ lives, I’m overwhelmed with gratitude for the opportunity to work one-on-one with young people over the course of many years.”

In fact, now that Allison has been teaching for a number of years, her favorite times are catching up with prior students over lunch or coffee. “It’s exciting to see what my former students do with their lives as they grow into adulthood,” she says.

Allison also was a one-time snake handler (a long story involving removing a baby snake from her house that turned out to be a copperhead!) and a one-time opera singer, (I Pagliacci) in 1991). She and her husband David have an adorable young son, Elliott, who began music classes at the age of six months. Elliott loves strumming the family’s guitars and playing the piano keys.

Village Medical, formerly Morrow Family Medicine, is an award-winning, state-of-the-art family practice with offices in Cumming and Milton, Georgia. The practice combines healthcare information technology with old-fashioned care to provide the type of care that many are in search of today. Two physicians, three physician assistants and two nurse practitioners are supported by a knowledgeable and friendly staff to make your visit to Village Medical one that will remind you of the way healthcare should be.  At Village Medical, we like to say we are “bringing the care back to healthcare!”  The practice has been named the “Best of Forsyth” in Family Medicine in all five years of the award, is a three-time consecutive winner of the “Best of North Atlanta” by readers of Appen Media, and the 2019 winner of “Best of Life” in North Fulton County.

Dr. Jim Morrow is the founder of Morrow Family Medicine. He has been a trailblazer and evangelist in healthcare information technology, was named Physician IT Leader of the Year by HIMSS, a HIMSS Davies Award Winner, the Cumming-Forsyth Chamber of Commerce Steve Bloom Award Winner as Entrepreneur of the Year and he received a Phoenix Award as Community Leader of the Year from the Metro Atlanta Chamber of Commerce.  He is married to Peggie Morrow and together they founded the Forsyth BYOT Benefit, a charity in Forsyth County to support students in need of technology and devices. They have two Goldendoodles, a gaggle of grandchildren and enjoy life on and around Lake Lanier.

The complete show archive of To Your Health with Dr. Jim Morrow addresses a wide range of health and wellness topics.